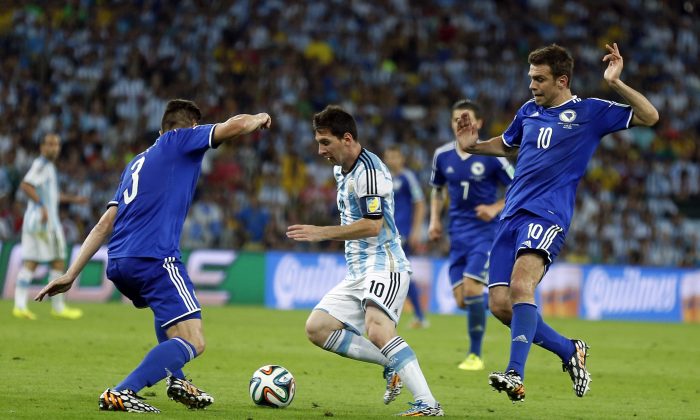 Lionel Messi scored a goal in the Argentina vs Bosnia game on Sunday, June 15.

The first goal came after a cross from Messi was headed by an Argentinian player then inadvertently knocked into the goal by a Bosnia player.

His second came after a nifty move left two defenders knotted up. His kick went past the goalie and hit the left goal post, then bounced into the right side.

Messi was visibly excited after the goal, celebrating with his teammates, perhaps feeling some of the pressure lifted off.

See an Associated Press preview of the game below.

Argentina leaves out Higuain against Bosnia

RIO DE JANEIRO—Argentina coach Alejandro Sabella has dropped both Gonzalo Higuain and Ezequiel Lavezzi from his lineup in the team’s World Cup opener against Bosnia.

The move suggests Argentina will play with only two strikers — captain Lionel Messi and Sergio Aguero — instead of the three-man attack that Sabella often chooses.

The Group F match is the first 2014 World Cup game to be played at Rio de Janeiro’s famed Maracana stadium.