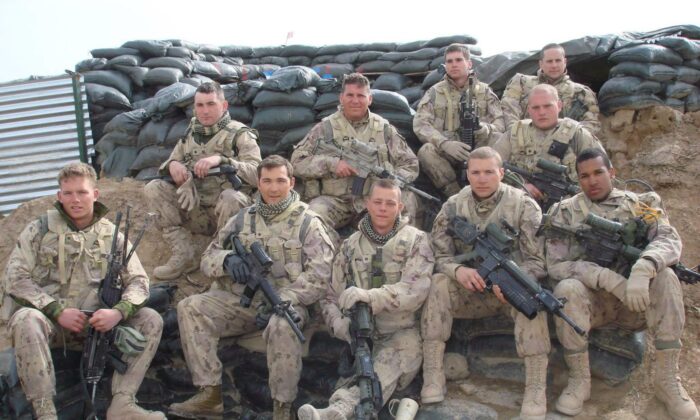 Lionel Desmond (front row, far right) was part of the 2nd battalion, of the Royal Canadian Regiment, based at CFB Gagetown and shown in this 2007 handout photo taken in Panjwai district in between patrol base Wilson and Masum Ghar in Afghanistan. (The Canadian Press/HO-Facebook-Trev Bungay)
Canada

A Nova Scotia inquiry investigating why a former Afghanistan war veteran killed his family and himself in 2017 heard Tuesday from a federal lawyer who defended the work of Veterans Affairs Canada.

Lori Ward told the inquiry it would be easy to blame the federal department for the deaths of Lionel Desmond and three family members, saying an unfair narrative has emerged about an uncaring bureaucracy.

Ward submitted a long list of examples showing how Desmond’s case manager at Veterans Affairs went out of her way to help her client make a smooth transition to civilian life in 2015 and 2016.

Desmond served in Afghanistan as an infantryman in 2007 and was diagnosed with post-traumatic stress disorder in 2011 before he was medically released from the army in July 2015.

The inquiry has heard Desmond was a desperately ill man whose marriage was in trouble when he left a Montreal-based residential treatment program in August 2016 and returned home to eastern Nova Scotia.

A Nova Scotia psychiatrist who accepted Desmond as a patient in 2016 has told the inquiry that the former soldier appeared to be falling through the cracks in the health-care system as he struggled to find help for his worsening mental state. The inquiry also heard that Desmond did not receive any therapeutic treatment during the last four months of his life.

Inquiry lead counsel Allen Murray told the hearings on Tuesday that Desmond had fallen into a “treatment void.”

On Jan. 3, 2017, Desmond legally bought a semi-automatic rifle and later that day used it to fatally shoot his wife, Shanna; their 10-year-old daughter, Aaliyah; and his mother, Brenda, before turning the gun on himself in the family’s rural home in Upper Big Tracadie, N.S.

The man leading the inquiry, provincial court Judge Warren K. Zimmer, is expected to produce a final report with findings and recommendations this fall.

The inquiry started its work in May 2019, and public hearings began in January 2020, but there were a number of delays caused by the COVID-19 pandemic. In all, 69 witnesses testified under oath during 53 days of hearings in Guysborough, N.S., and later in Port Hawkesbury, N.S.

The inquiry’s mandate includes determining whether Desmond and his family had access to appropriate mental health and domestic violence intervention services. As well, the inquiry has examined the Canadian Firearms Program, provincial access to federal health records and whether health-care and social services providers were trained to recognize the symptoms of domestic violence.