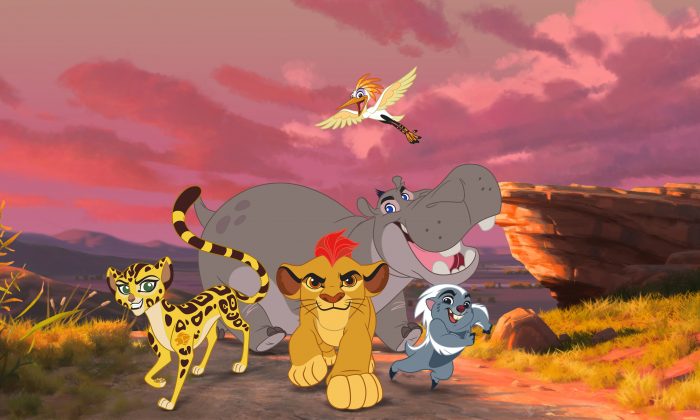 This photo provided by Disney Junior shows Fuli, Kion, Ono, Beshte, and Bunga in a scene from "The Lion Guard: Return of the Roar," a primetime television movie event premiering Sunday, Nov. 22, 2015, at 7:00 p.m., ET/PT on the Disney Channel. (Disney Junior via AP)
Entertainment

LOS ANGELES — When Ford Riley was tasked with adding a new TV project to Disney’s treasured — and lucrative — “Lion King” screen and stage franchise, he knew he had to do right by it.

Mulling the original 1994 animated movie and its 1998 home video sequel, Riley decided that creating another offspring for lion king Simba and mate Nala would open up a world of possibilities.

Their first-born, daughter Kiara, was destined to become the lion queen. But if she had a kid brother — a furry version of England’s Prince Harry, runner-up to older sibling William in the crown sweepstakes — what would his fate be?

“I’ve got two kids, and it seems like in storytelling the second-born never gets a really good job. So I was eager to tell his story for the TV series and make him the hero,” Riley said.

So Riley created male cub Kion as the star of both a Disney Channel movie, “The Lion Guard: Return of the Roar” airing 7 p.m. EST Sunday (and on Disney on-demand platforms Monday), and the Disney Junior series “The Lion Guard,” debuting in January.

The writer-producer hit on an important job for Kion: Protector of his family’s African savannah “Pride Lands” and its circle of life (just try not to hum the tune). To build a security force, he turns to his talented best buddies, a varied group who are among nature’s fiercest, fastest, strongest and sharpest-eyed.

While honoring the original film’s “epic storytelling,” Riley said, the new project also carries “a definite message of diversity with these different animals learning how to work together.”

The TV movie is aimed at a general family audience, with the upcoming series intended for Disney Junior’s target audience of 2- to 7-year-olds.

Before pitching his self-described concept of “‘Lion King’ meets ‘The Avengers'” to Disney executives, Riley ran it by a trusted critic: His son, Quinn, 12, who happens to be the younger sibling of 14-year-old Fiona, and whose own weekly superhero team game with his buddies helped inspire “The Lion Guard” idea.

“‘That’s cool, dad,'” the then-8-year-old replied to the concept, and headed off to his bedroom — where Riley later found him playing his own version of “Lion Guard” with plastic animals.

“That’s when I knew I had a great idea,” Riley said.

The new series is part of a vast and lucrative family tree. Besides the theatrical film, it includes the long-running, Tony Award-winning Broadway musical; attractions at the Disneyland and Walt Disney World parks; the 1990s TV series “The Lion King’s Timon and Pumbaa,” soundtracks and video games.

Disney declined to provide figures for the franchise’s financial prowess, which includes a reported worldwide box-office gross of about $1 billion for the original movie and $6.2 billion for the stage show alone. But the company happily acknowledges its value to audiences.

“The story of ‘The Lion King’ has deeply touched families around the world since its original theatrical release 21 years ago,” said Nancy Kanter, general manager for Disney Junior Worldwide.

Artists Disney and Miyazaki Connect to Other Worlds

To connect with the original film in look as well as tone, Riley used the same 2D animation, with images hand-drawn on a computer, instead of the 3D computer-generated animation common on other Disney Junior shows.

Barry Atkinson, an artist who worked on the original “Lion King,” was brought in to help with the background and “make it feel lush, like the Pride Lands did in the movie,” Riley said.

Actor Jones’ famously rich, booming voice was another key touchstone for “The Lion Guard.” His involvement also provided a circle-of-life moment for Riley: Jones spoke at his New York University commencement, counseling graduates to embrace technology or get left behind.

“Many, many years later, I’m working with James Earl Jones, and we’re connected digitally by a patch and the recording of his voice is all being done by computers. So I said to him, ‘Thank you for the advice. That little piece of information made me look at technology as an opportunity.'”

“He laughed and said, ‘Really, it was about me trying to figure out how to work my cellphone.'”