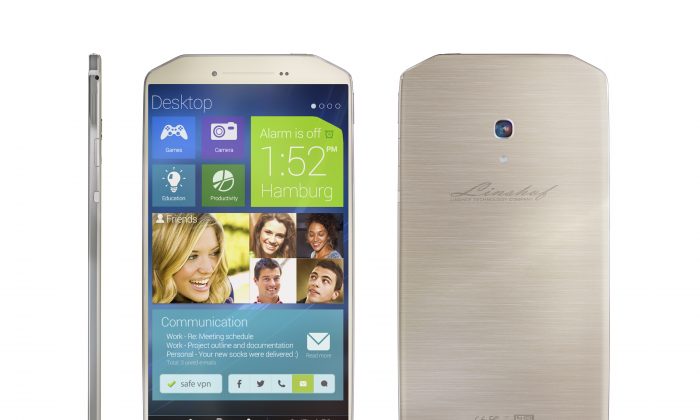 Linshof i8 smartphone with the custom UI is set to release in Q1 of 2015.
Tech

While original equipment manufacturers (OEM) fight each other in race to the bottom to grab the last vestige of users in developing markets, a new OEM launching in Germany aims to produce high-end products at a reasonable price.

Linshof, a German based company, says it will release a “clean” version of Android smartphones and tablets. Their devices will be released to Asia towards the end of March 2015. Europe and the US will have to wait until June of 2015.

The octagon shaped devices will run a stock version of the Android 5.0 operating system. This means it will be virtually bloatware-free, which will give users an experience similar to that of Google’s own Nexus brand of devices.

The Linkshof i8 smartphone does come with an optional custom user interface (UI), which users can disable, and judging from early photos it resembles Samsung’s Magazine UI, with a flat, square shaped design.

The Linshof i8 smartphone will come with latest hardware:

The 80 GB storage is a two-in-one. 16GB of that storage is on a super-high data rate chip, which will allow apps to start faster and the operating system to boot quicker.

The Linshof tablet has identical specifications except that the screen has a higher resolution, at 2048 x 1536 pixels, and a price tag of $360 USD. Both devices come with either a black or white exterior.

In addition to the smartphone and tablet, Linshof will release a high-end personal computer (PC) next year as well, with the following specifications:

The PC will run nearly silently while doing most common tasks, such as browsing the Internet, or doing word processing. There is no indication whether the PC will come with Windows, Linux or any other operating system.