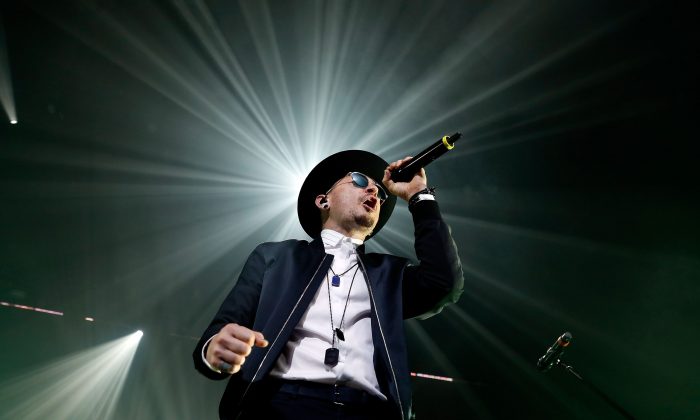 Chester Bennington of Linkin Park performs during CBS RADIO's two-night "SPF" concert at The Chelsea inside The Cosmopolitan of Las Vegas on May 19, 2017 in Las Vegas, Nevada. The band's performance coincided with their highly anticipated seventh studio album release, "One More Light." (Photo by Isaac Brekken/Getty Images for CBS Radio Inc. )
Entertainment

Linkin Park Sales Skyrocket 5,332 Percent in US After Death of Chester Bennington

The band’s albums sold 21,000 copies on Thursday, up from less than 1,000 the day before. Meanwhile, fans downloaded Linkin Park’s stand-alone tracks 90,000 times that day, compared to 2,000 the previous day.

“One More Light,” the band’s last album, sold the most copies on Thursday (6,000). The set was released in May atop the Billboard 200 chart, giving the rock act its sixth chart topping album.

Billboard.com anticipates that three of Linkin Park’s albums will re-enter the Billboard 200 list dated Aug. 5. Among the band’s most recent album “Hybrid Tea” and “Meteora“ are expected to re-enter to chart.

The Billboard 200 chart will be revealed on Sunday, July 23.

Meanwhile, the band’s top selling songs on July 20 were:

Live Nation, the promoter for the tour issued a statement on Friday:

“We are incredibly saddened to hear about the passing of Chester Bennington. The Linkin Park ‘One More Light’ North American Tour has been cancelled and refunds are available at point of purchase. Our thoughts go out to all those affected.”

Bennington died on the birthday of his friend Chris Cornell, lead singer of Soundgarden. Cornell committed suicide in May. Bennington wrote an emotional farewell letter when he learned of his friend’s death.

Bennington revealed in an interview that he was going through severe depression following Cornell’s death.