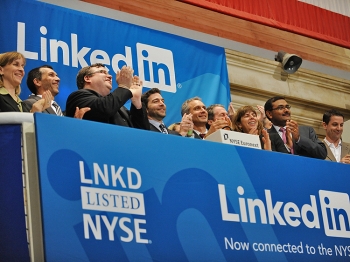 IPO SOARED: Linkedin founder Reid Garrett Hoffman (Center with beard) and CEO Jeff Weiner (2nd R) at the ringing of the opening bell of the New York Stock Exchange May 19 during the initial public offering of the company. (Stan Honda/AFP/Getty Images)
Business & Economy

Antonio Perez
View profile
Follow
biggersmaller
Print
NEW YORK—Investors and analysts got a glance of the frenzied public demand for shares of social-networking firms on Thursday, as LinkedIn's first day performance far exceeded even the most sanguine expectations.

Shares of LinkedIn, the popular social networking site for professionals, soared after its initial public offering (IPO) on Thursday, finishing the day at more than double its offering price as investors bid up its share price in a frenzy.

LinkedIn, trading on the New York Stock Exchange with the symbol “LNKD,” finished Thursday at $94.00, more than double its offering price of $45 per share.

The company sold 7.84 million shares on Wednesday, at $45 per share, after raising its estimated price per share from the $32 to $35 range to $45 per share. LinkedIn raised $353 million from the IPO.

LinkedIn is the largest networking website for professionals, and is used by many recruiters to search for new candidates for placement in the corporate sector. Membership for individuals is free, but recruiters pay a fee to get access to listings of candidates.

After initially valuing the company around $3 billion, the inflated stock price pushed the market capitalization of LinkedIn higher, and the company exceeded $8 billion in valuation on Thursday.

Responding to whether he thinks that LinkedIn’s valuation is inflated, CEO Jeff Weiner told CNBC, “At the end of the day it’s not about the share price today, it’s about us continuing to execute on the long-term plan.”

LinkedIn’s IPO and its subsequent performance is used by analysts as a benchmark for other social media giants, such as Facebook and Twitter, both of which say that an IPO is in the cards for the future.

But unlike Facebook and Twitter, which rely solely on advertising at the moment for revenues, LinkedIn offers listings and other recruitment solutions to corporations and recruiting firms, as well as paid premium subscriptions.

Some analysts cautioned on Thursday against buying in at too high of a price due to the publicity. "The mentality that’s out there is, ‘We can’t get into Facebook, we can’t get into Twitter or Groupon or whatever, so we’ll pay whatever it takes to get into this uncorrelated proxy for those offerings,’” analyst David Menlow said in an interview with the Daily Beast.

LinkedIn boasts more than 100 million members in over 200 countries around the world. It reported 2010 revenues of $243 million and profits of $15.4 million.