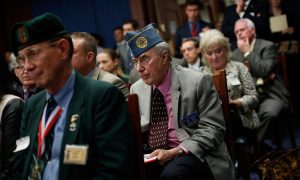 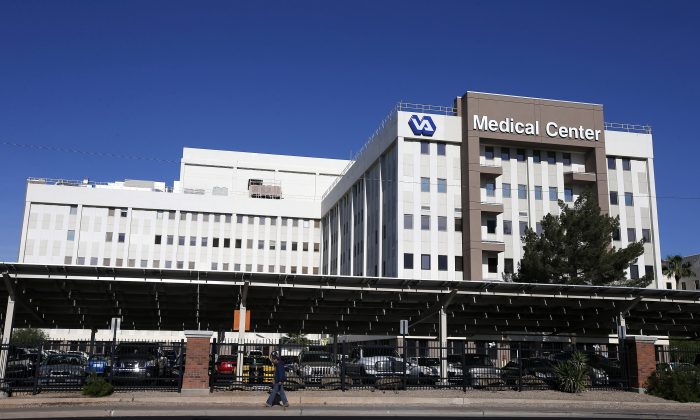 This April 28, 2014, photo shows the Phoenix VA Health Care Center in Phoenix. The Veterans Affairs Department says more than 57,000 patients are still waiting for initial medical appointments at VA hospitals and clinics 90 days or more after requesting them. (AP Photo/Ross D. Franklin)
US

A connection between veteran deaths and wait times for care at Veterans Affairs hospitals cannot be made yet, according to a preliminary report released Tuesday. The report follows months of investigations by the Veterans Affairs’ Office of Inspector General (OIG) after revelations last spring that nearly 40 veterans died at the Phoenix VA hospital while waiting for care.

Allegations of inappropriate scheduling practices and other  misconduct spread from Phoenix to other hospitals in the United States and led to a $16 billion budget increase from Congress in July. The money was meant to fix unacceptable wait times and other problems. Part of it was allocated to pay for veterans to get prompt care outside the VA system.

The OIG’s interim report states that they are not reporting “whether any delay in scheduling a primary care appointment resulted in a delay in diagnosis or treatment, particularly for those veterans who died while on a waiting list.”

The independent auditing authority also said that conclusive assessments require multiple types of detailed review and analysis by the office’s clinical teams. The office is still in the process of examining VA and non-VA medical records, death certificates, and autopsy results. They have also asked for information from relevant state agencies and had subpoenas issued to obtain non-VA medical records.

The allegations of inordinately long wait times are nothing new to the troubled federal agency, which serves approximately 21 million veterans in the United States. Almost half of those are over the age of 65.

Since 2005, the VA’s inspector general office has issued 18 reports on similar allegations of scheduling problems, long wait times, and the resulting negative impact on patient care. The reports, conducted at both local and national levels, are available online.

However, the administration and government leaders seemed to breathe a collective sigh of relief on Tuesday over the interim report. Some characterized it as more definitive than it is.

Senate Veterans’ Affairs Committee Chairman Bernie Sanders (I-Vt.) said in a statement that those who lied or manipulated data should be held accountable, but tried to debunk conclusions that veterans died waiting for care.

“I was relieved … that the IG was ‘unable to conclusively assert’ that patients died because of long waiting lines as news media reports had widely speculated,” his statement read.

Obama has touted his Veterans Access, Choice and Accountability Act as the vanguard for a “new culture of accountability” at the VA. The act includes measures for more medical professional staffing, alternatives for care if a veteran is too far from a VA facility, and greater authority to fire senior executives and others who engage in unethical practices.

VA Secretary Robert McDonald, who spoke at the same event, said his agency has worked toward getting more than 266,000 veterans off waiting lists for care, and almost a million have been referred to private sector care. He also said that the number of those waiting for an appointment has gone down by 57 percent since mid-May.

“If we fail at serving veterans, we fail,” McDonald told the crowd. McDonald took over from former VA head Eric Shinseki, who resigned in May. The report and speeches came on the same day that the VA announced a 33 percent drop in veteran homelessness since 2010.

In a written memorandum, obtained by The Associated Press, Secretary McDonald emphasized the inconclusive nature of the report.

“It is important to note that while OIG’s case reviews in the report document substantial delays in care, and quality-of-care concerns, OIG was unable to conclusively assert that the absence of timely quality care caused the death of these veterans.”

McDonald acknowledged that the VA is “in the midst of a very serious crisis” and promised to follow all recommendations from the inspector general’s report.

“We sincerely apologize to all veterans and we will continue to listen to veterans, their families, veterans service organizations and our VA employees to improve access to the care and benefits veterans earned and deserve,” said McDonald’s memo, which was also signed by Carolyn Clancy, VA undersecretary for health.

There is no word on when the final report will be issued.