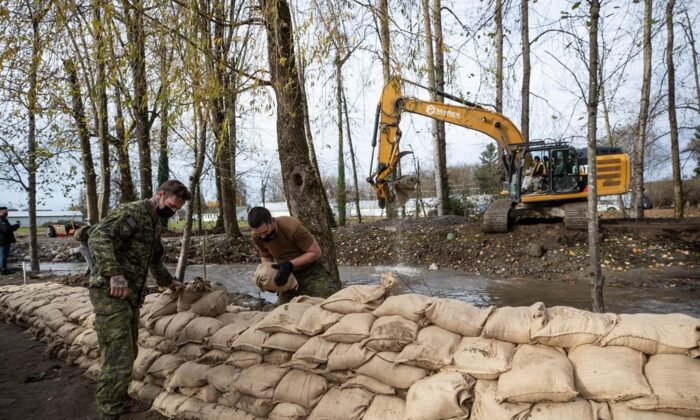 Members of the Canadian Forces build a temporary dike with sandbags behind houses on Clayburn Creek ahead of a rainfall warning Environment Canada has forecast for the region which is already affected by flooding, in Abbotsford, B.C., November 24, 2021. (The Canadian Press/Darryl Dyck)
Canada

VANCOUVER—A line of storms is forecast to sweep across British Columbia as the province works to rebuild from devastating flooding and deadly mudslides last week that destroyed parts of major highways, rail lines, and farmland.

Wind and rainfall warnings blanketed most of the B.C. coast and come after about a dozen so-called atmospheric rivers have saturated land in the province since September.

Public Safety Minister Mike Farnworth says even routine rainfall may cause already swollen rivers to rise to dangerous heights and he urged residents to prepare for evacuations and watch for updates.

He says the government is making headway on recovery since last week’s floods, with supply chains stabilizing, gas shortages starting to ease and some evacuees allowed to return to their homes.

The major arterial supply route of Highway 1 through the Fraser Valley was on track to reopen Thursday, while Canadian Pacific Railway announced the first trains have arrived in Vancouver from Kamloops carrying grain and fuel.

Farnworth says the province is in “uncharted territory.”

“These storms are coming at a time when we’re already grappling with some of the most destructive weather we’ve ever seen,” Farnworth said Wednesday.

“Although we are up to the challenge, we are working through a monumental task.”

Transportation Minister Rob Fleming said the government is prepared to close some roads as a precaution as modellers try to predict where damage might occur.

The number of people confirmed killed or missing in the floods has risen to six.

The RCMP is investigating a report of a missing woman who was unable to leave a home on Highway 8 before it was washed away last week. Four bodies have been recovered from a mudslide along Highway 99 near Lillooet and one man is still missing.

The centre that monitors the province’s waterways said several storms will drench B.C., dropping up to 70 millimetres of rain over the Fraser Valley, including flood-damaged Abbotsford by Thursday, and even more over Vancouver’s North Shore mountains.

The statement from the River Forecast Centre said another storm will arrive Saturday and “additional storms are expected early next week,” although the amount and severity of rainfall are still being determined.

Rivers in the Fraser Valley could rise by amounts similar to typical fall storms but could be “more problematic due to flood response and recovery efforts and damaged infrastructure in the region,” it said.