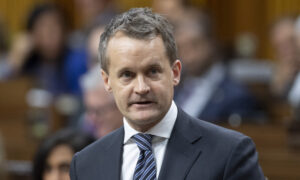 'Operation of Line 5 Is Non-Negotiable': Natural Resources Minister on Michigan’s Order to Shut It Down
0
Share Now
TelegramFacebookTweetEmailTellMeWeReddit
Copy Link 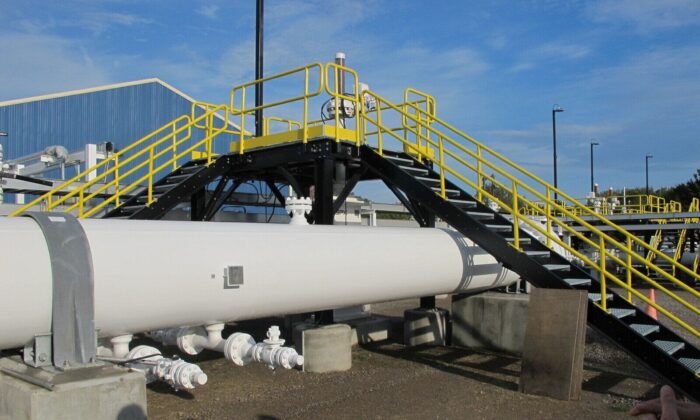 An above-ground section of Line 5 at Enbridge's Mackinaw City pump station in Michigan. The state of Michigan has told Enbridge it must shut down the pipeline by May 12. (AP Photo/John Flesher)
Canada

Despite trying to sound the alarm for years, energy affordability advocate Dan McTeague told The Epoch Times that the Canadian government and media may have awakened too late to the potential closure of the Line 5 petroleum pipeline.

“Until about a couple of months ago, no one took this issue seriously,” said McTeague, a former Liberal MP and founder of Canadians for Affordable Energy.

“Every time I met with Michigan and Ohio representatives, they pleaded with me to ensure that the Canadian media or government was taking this seriously,” he said.

“The navel-gazing by our politicians and by our elites and by our media has been appallingly out of sync with the reality that we could have very little, if any, fuel to drive our economy. Whether we want the transition to the green economy or not, we seem to be completely oblivious to the danger that lurks and lies dead ahead.”

Last year, Michigan Governor Gretchen Whitmer announced May 12, 2021, as the expiry date for the 67-year-old easement permit for Line 5. Whitmer wants the pipeline shut down because of concerns about a potential spill in the channel that connects Lake Huron and Lake Michigan. Owned by Calgary-based Enbridge, the pipeline starts in Superior, Wisconsin, and carries up to 540,000 barrels of petroleum each day through the Straits of Mackinac in northern Michigan to Sarnia, Ontario.

According to Enbridge, a Line 5 shutdown would mean the refineries it serves in Ontario, Quebec, Michigan, Ohio, and Pennsylvania would receive about 45 percent less crude oil from the company than they currently require. The supply from Line 5 is also a petroleum source for the Line 9 pipeline running from Sarnia to Quebec, and Line 9 could be as much as 40–50 percent short of its normal supply to Quebec refineries. Gasoline, propane, jet fuel, and other products would be in short supply in those two provinces and three U.S. states.

No contingency plan can fill the void. Shipping, trucking, and rail could replace only a fraction of the supply—if the fuel to run them could still be found.

“Where are you going get your diesel to operate your trucks and trains? And what’s the cost going to be, assuming we can get it?” asks McTeague.

An imminent shutdown would leave Canada with a worst-case economic scenario, he said.

“Perfect storm, the gathering of all possible worst scenarios come in at once. You’re in a pandemic, you’re in a supply crunch. Supply chains are badly stressed right now. Energy prices are going through the roof. Demand for everything is, throughout North America, throughout the world, heating up.”

A Line 5 closure could triple Ontario gas prices and destroy tens of thousands of jobs. The pipeline, which has been in operation since 1953, provides feedstock for petrochemical facilities in southwest Ontario. The Sarnia-Lambton Petrochemical and Refining Complex employs nearly 5,000 people and indirectly generates another 23,500 jobs.

The full picture would be even worse, says Geoffrey Hale, a political science professor at the University of Lethbridge.

“Supply chain spillover through the Ontario economy would suggest that this is something that the government would be foolish to ignore—especially if it wants to go into an election,” Hale said in an interview.

He said momentum against Enbridge began after its 2010 oil spill near Kalamazoo, Michigan.

“The deal that [Michigan’s] Governor Snyder worked out before leaving office in 2016 was the most sensible and pragmatic approach to the problem. If you have a recognizable risk from two pipelines sitting on the bottom of Lake Michigan, putting them in a concrete tunnel and then putting other utility connections … into them as well is a very sensible way of dealing with it,” Hale said.

The tunnel project has been held up by two lawsuits, and other cases are also before the courts.

“There is a legal dispute over the validity of that [pipeline easement] agreement,” Hale explained. “And then Governor Whitmer has to answer to the court as to her capacity to cancel that agreement unilaterally. I think that process is going to have to work its way through over the next year or so.”

An international agreement may prevail over state-level legal questions. In 1977, the Canadian government signed a treaty with the United States to declare that petroleum pipelines were federal jurisdiction and that both countries would ensure “uninterrupted transmission” across their borders.

“Will the pipeline treaty work? Time will tell,” Hale says.

“There’s almost no chance that we’ll be shut down,” he said. “Whitmer has political ambitions beyond being the governor of Michigan.”

Natural Resources Minister Seamus O’Regan told a parliamentary committee in early March that Ottawa will take whatever measures are necessary to keep Line 5 operating, but didn’t explain what the government’s strategy is. Politicians have urged Prime Minister Justin Trudeau to speak directly with U.S. President Joe Biden about the issue.

“As far as Trudeau goes, he’s trying to give the appearance of all hands on deck and fighting for Canada’s interest, but the problem is he has no moral authority,” he said.

“He’s vetoed Northern Gateway. He sabotaged Energy East. He brought in the tanker ban on the northern B.C. coast. He brought in C-69 that makes pipeline approval next to impossible. And now he’s all set to give the aboriginals a veto on pipelines.”

A dual citizen who lives in Montana, Morton remains concerned for the longer term.

“We’re going to win the battle but we’re losing the war, because this is just another attempt by the anti-oilsands, anti-pipeline coalition to publicize the issue, raise money, sign up volunteers, and raise publicity.”