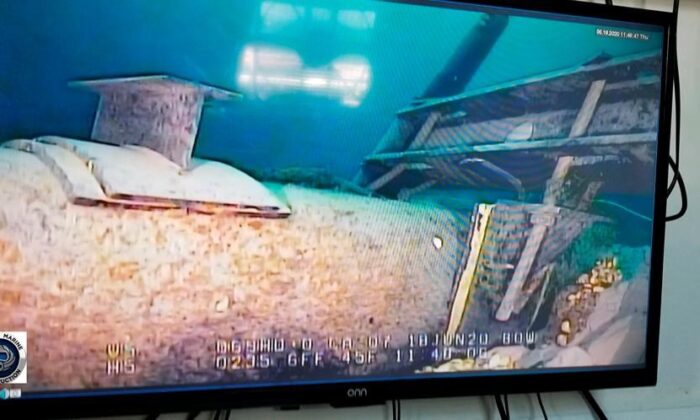 Line 5: Questions Remain Even as White House Says No Shutdown

With climate pledges and inflation running high on both sides of the border, a recent report made some waves by indicating that the Biden administration was evaluating the impacts of shutting down a major Canadian pipeline passing through the U.S. state of Michigan.

Politico reported in early November that the White House was doing a “deep data dive” to evaluate the impacts on fuel prices in Michigan and surrounding areas if Enbridge’s Line 5 were to be shut down.

White House spokesperson Karine Jean-Pierre addressed this information on Nov. 8, saying that “any reporting indicating that some decision has been made is not accurate.” But when pressed to say if the administration is studying the impact of shutting down Line 5, Jean-Pierre responded “Yeah.”

In remarks on Nov. 9, Jean-Pierre said she wanted to clarify what she stated the day prior, declaring that the study she mentioned was related to the Army Corps of Engineers’ environmental impact study of Enbridge’s proposed replacement for Line 5.

Jean-Pierre added that Canada has invoked the dispute resolution of the 1977 Transit Pipelines Treaty to prevent the shutdown.

“These negotiations and discussions between the two countries shouldn’t be viewed as anything more than that and certainly not an indicator that the U.S. government is considering shutdown. That is something that we’re not going to do,” Jean-Pierre said, mentioning also the ongoing litigation between the state of Michigan and Enbridge.

Citing environmental concerns, with the 1953-built pipeline running under the Straits of Mackinac in northern Michigan, the state of Michigan told Enbridge in November 2020 that its 1953 easement was being revoked and terminated and also took the company to court to validate the action. Court-mandated mediation between the parties is not going well, with Michigan leaving the negotiating table in mid-September.

Impact of a Shutdown

Any talk of shutting down Line 5 generates some nervousness, given how crucial it is to Eastern Canada.

“If Line 5 is shut down, like it just goes cold turkey to zero, there’s no way to replace all of that oil,” says Richard Masson, industry specialist and executive fellow at the University of Calgary’s School of Public Policy.

“That becomes chaotic, because you don’t feed the refineries, you don’t have the gasoline and diesel and jet fuel that is available,” he told The Epoch Times, adding that the infrastructure, whether it be rail or truck, doesn’t exist to compensate. Given the potential massive economic impact, Masson says that a shutdown is unlikely and that if it did happen, “it would be reversed pretty quickly by a court somewhere.”

In that vein, University of Calgary associate law professor Kristen van de Biezenbos told Bloomberg back in May that U.S. President Joe Biden could use an executive order to force Michigan to keep the pipeline open.

Masson says environmental concerns and less reliance on the pipeline are factors in Michigan’s push to shut down Line 5.

“Michigan is more a transit state. … Propane that comes off the pipeline is used in particular by Michigan, but they don’t have refineries that depend on it like Ontario does. And so Michigan would suffer less by far than Ontario would,” he says, adding that a previous Enbridge spill in the state could also be part of the reason.

“So all of that comes together in the politics of ‘we want to shut the line down,’ on top of climate change as a reason.”

Line 5 moves on average 540,000 barrels a day of light crude oil and natural gas liquids from Superior, Wisconsin, to Sarnia, Ontario, as part of a system to transport the hydrocarbons from Alberta to mostly Eastern Canada.

According to Enbridge, the pipeline supplies half the propane used in Michigan, provides more than four million gallons (15 million litres) of transportation fuel daily to the state, and also transports 80 percent of the crude oil produced in northern Michigan.

Elmira Aliakbari, director of the Centre for Natural Resource Studies at the Fraser Institute, told The Epoch Times that the “potential shutdown of this pipeline will have devastating consequences for Ontarians and Quebecers.”

Aliakbari wrote last May in a Fraser blog post that Line 5 supplies almost half of Ontario’s crude oil and natural gas. And for Quebec, Line 5 supplies Line 9, which brings to the province about two-thirds of the crude oil refined and consumed there.

“Simply put, a shutdown of Line 5 will threaten the energy supply of Canada’s two most populous provinces and will lead to job losses and spikes in energy prices that would increase the cost of almost everything, from food to driving cars to heating homes,” she wrote.

In 2018, Michigan passed a law to establish the Mackinac Straits Corridor Authority (MSCA) to oversee the replacement of the disputed underwater Line 5 section and house it in a utility tunnel. Currently, the aging dual-pipes at the bed of the straits are exposed, heightening the risk of spills. Soon after its establishment, the MSCA approved the project.

Enbridge told The Epoch Times that its Line 5 pipeline continues to operate safely and that it spends millions each year to assure that safety. But it added that the new project would make a “safe pipeline safer and virtually eliminates the chance of an anchor strike or spill.”

One such notable anchor strike incident occurred in 2018 when a vessel dragged its 12,000-pound anchor across the straits, damaging Line 5 and submerged power cables.

Since 2018, Enbridge’s replacement project has undergone multiple stages of approval. It filed an application with the Michigan Public Service Commission (MPSC) in April 2020, which is still pending. The MPSC declined to comment on the current issues, citing the court case.

The Michigan Department of Environment, Great Lakes & Energy was also contacted and said its role is quite limited on this file but it has earlier this year approved the permits for wetlands work and water discharges for the proposed replacement line.

As for the office of Michigan’s attorney general, which is litigating the case, it says the bypass project remains elusive and the current threat needs to be addressed.

“We remain focused on the continuing threat presented by the existing pipelines in the water. We cannot afford to wait for a tunnel that will not be built for several years, if at all,” says press secretary Lynsey Mukomel in a statement released to The Epoch Times.

Michigan Governor Gretchen Whitmer, a Democratic, wrote an opinion piece in The Washington Post in May to explain why she is seeking to shut down Line 5. “Oil and water don’t mix—especially when the latter involves the Great Lakes, the repository of more than 20 percent of the world’s fresh water,” she said.

She noted that previous major spills, such as BP’s Deepwater Horizon in the Gulf of Mexico in April 2010 and the rupture of Enbridge’s Line 6B pipeline in Michigan three months later, have alerted Americans to the “enormous potential dangers.”

The 12 federally recognized tribes in Michigan reportedly sent a letter to the Biden administration on Nov. 5 voicing their opposition to Line 5 and its replacement project.

“We view Line 5 as an existential threat to our treaty-protected rights, resources, and fundamental way of life as Anishinaabe people of the Great Lakes,” says the letter.

The Epoch Times attempted to reach one of the Michigan tribes without success, but did receive a response from the Anishinaabe on the Canadian side of the border.

“Anishinabek Nation concurs with the tribes in Michigan,” says Grand Council Chief Reg Niganobe. “Shutting down Line 5 is imperative to the safety of the Great Lakes freshwater and ecosystem within.”

The Epoch Times also contacted various environmental organizations to comment on Line 5 but they either did not respond or said they were unavailable.

Editor’s note: Information about what Line 5 supplies to Michigan was updated on Nov. 16.