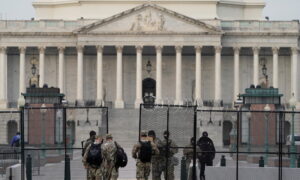 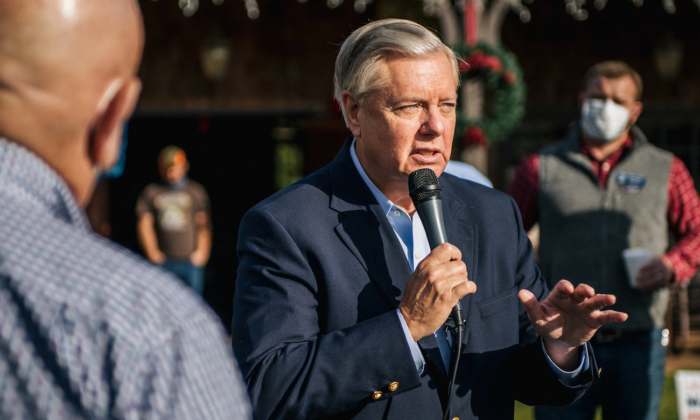 Graham told reporters on Wednesday that he spoke with Trump about the likely outcome of the trial after his attorneys—Bruce Castor and David Schoen—made their arguments.

“I think his team will do better, can do better,” Graham told reporters. “I reinforced to the president, the case is over. It’s just a matter of getting the final verdict now.”

Forty-four Republican senators, including GOP Leader Mitch McConnell (R-Ky.), voted against holding the trial on Tuesday evening, suggesting the Senate will not reach the 67-vote threshold to convict Trump. The president’s attorneys stated that it goes against the Constitution to impeach or try a former office-holder.

Graham, meanwhile, described Trump’s mood after the lawyers made their arguments, saying the former president didn’t appear to be frustrated. Some media outlets, which cited anonymous sources, reported that he was angry over their performance on Tuesday.

“Well, not, no, not particularly,” Graham said on whether he sensed that Trump was frustrated. “We mostly talked about the vote, and I said we had 44 people saying it’s not constitutional.”

“They talked about many things, but they didn’t talk about the issue at hand,” he said. Cassidy’s vote on Tuesday was the first time he joined Democrats.

Graham noted that not all Republicans who voted to hold the trial would vote to convict Trump.

“I think the vote for not guilty will probably grow beyond 44,” he said. “I respect Bill. He’s a really good senator. He’s done a great job up here,” he added.

“People are emotional about President Trump,” he noted. “I’m sure Bill will be fine. He will vote his conscience at the end of the day. Let’s just see how he votes when it’s all said and done.”

‘Can’t Do It’: Increasing Number of NFL Stars Speak Out Against COVID-19 Vaccine Policy
0

New York Bars Anyone Under 18 From Getting Married
0