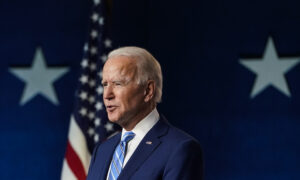 Sen. Lindsey Graham (R-S.C.), the head of the Senate Judiciary Committee, said that lawsuits filed by President Donald Trump could show that millions of ballots in Nevada were sent through the state machines without signatures being properly confirmed.

“In Nevada, they have a machine to verify mail-in ballot signatures,” he said on “Fox & Friends” on Thursday. “If you don’t have a signature on a mail-in ballot, then it’s useless. The machine was basically turned off.”

Graham then asserted that millions of ballots were run through the machine “whether it was fraudulent or not” as they would accept every signature. Trump’s team “may win that lawsuit,” he said.

Someone could vote “a thousand times for Democratic challenger Joe Biden without any verified signatures, Graham added. “Signature verification in Nevada was meaningless because they set the computer up on a setting where it would approve anything,” he remarked.

He alleged that in Clark County, where Las Vegas is located, the machines were “basically turned off.”

“I am convinced if you ran these signatures through with the machine set at the proper setting, thousands of ballots would be kicked out,” said Graham. “If you don’t have a system to check out the signatures, mail-in ballots become just, just ballot stuffing … they had the machine cut off. [They] may as well have not had a machine.”

Nevada’s secretary of state’s office has not responded to a request for comment.

Nevada Secretary of State Barbara Cegavske, a Republican, said the Election Integrity Task Force, which includes agents from the FBI, is helping her office probe “all creditable allegations of fraud related to the 2020 general election.”

“The Secretary of State has a sworn duty to ensure all election laws, both federal and state, are enforced. When someone is found to have violated any of these laws, they will be referred to the appropriate agency for prosecution,” she added.