Lindsey Graham: ‘Loves’ Joe Biden, But ‘None of Us Are Above Scrutiny,’ Begins Investigation 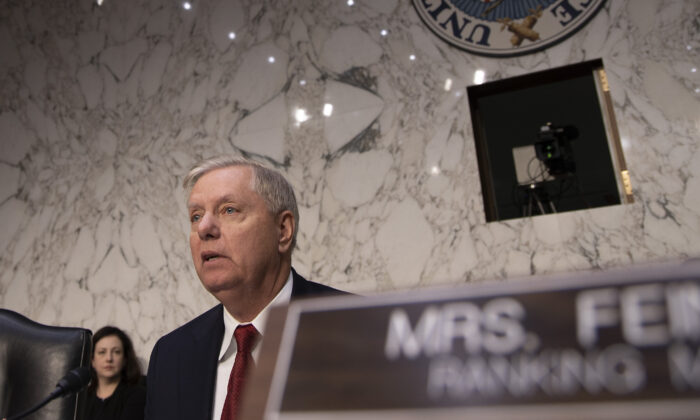 Sen. Lindsey Graham (R-S.C.) on Dec. 15 said that while he “loves” former Vice President and 2020 presidential candidate Joe Biden, he would begin an investigation into the 77-year-old as “none of us are above scrutiny.”

During an appearance on CBS News’ “Face the Nation,” the chairman of the Senate Judiciary Committee responded to previous comments from Biden that Graham would “regret his whole life” asking for documents related to him and his son, Hunter Biden and their dealings with Ukraine.

It comes after Graham said late last month that although he is friends with Biden, he has to press ahead with an investigation of Hunter Biden. Hunter Biden was formerly a board member of Ukrainian energy firm Burisma Holdings that is at the center of a House impeachment inquiry.

Graham said to “Face the Nation”: “You want to talk about Ukraine, it’s pretty hard for me to go home and tell my constituents to ignore the fact that Hunter Biden received $50,000 a month from a gas company in the Ukraine, run by the most corrupt person in the Ukraine, and two months after the gas company was investigated, the prosecutor got fired.”

Biden is a longtime frontrunner in the 2020 field but has been dogged by his family’s dealings with Ukraine and China. Hunter Biden was involved in companies in both countries while his father was in office, leading to conflict of interest concerns that have cropped up during the open impeachment hearings.

Biden fueled the accusations when he bragged last year that he threatened in 2016 to withhold $1 billion from Ukraine unless then-President Petro Poroshenko ousted Viktor Shokin, a prosecutor who was probing Hunter Biden’s employer Burisma.

Shokin has sworn that Biden’s pressure led to his ouster and told the State Department in January that “he was removed at the request of Mr. Joseph Biden.”

The Bidens have denied wrongdoing and are among those alleging Shokin was corrupt.

President Donald Trump in July asked newly elected Ukrainian President Volodymyr Zelensky, who campaigned on reforming the country, to “look into” what happened with the Bidens in the country. The call triggered the impeachment inquiry.

Graham last month sent a letter asking the State Department for documents, including call records between the former vice president and former Ukrainian President Petro Poroshenko about Burisma and Shokin.

“Joe Biden is a friend. He’s one of the most decent people I’ve ever met in my life. But here’s the deal. This whole process around the Ukraine reeks with politics,” Graham added.

“They’ve done everything but take a wrecking ball to Donald Trump and his family. We’re not going to live in a world where only Republicans get looked at.”

The senator said he hopes the transcripts of the phone calls will show there are no legitimate concerns about Ukraine, but that he needs to investigate.

“I hope I can look at the transcripts of the phone calls between Biden and the Ukraine … and say there is nothing there. These are legitimate concerns about what happened in the Ukraine. I love Joe Biden, but none of us are above scrutiny. I’d like to knock all this off and get back on governing the country,” Graham said.

He added that the ongoing impeachment inquiry against Trump is “a crock.”

“You’re shutting the president out … You’re weaponizing impeachment, and I want to end it. I don’t want to legitimize it. I hate what [the Democrats] are doing.”