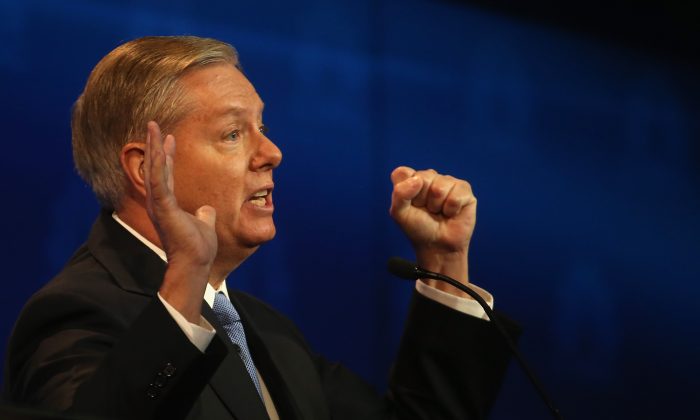 Two Republican presidential candidates have been placed on the “undercard” debate while two others have been booted from the two levels of debate altogether, Fox Business announced.

New Jersey Gov. Chris Christie and former Arkansas governor Mike Huckabee won’t be on the main stage for the first time since the debates started, shuttled instead to the “undercard” debate.

Huckabee responded in a statement that “I’m happy to debate anyone, anywhere, anytime,” while Christie linked to a viral video of his stump speech in New Hampshire, in which he talked about drug addiction and a friend who was ruined by painkillers.

“It doesn’t matter the stage,” Christie said. “Give me a podium and I’ll be there to talk about real issues like this.”

It doesn’t matter the stage, give me a podium and I’ll be there to talk about real issues like this: https://t.co/Fqu5Qi2piX #BringItOn

I’m happy to debate anyone, anywhere, anytime. We are months away from actual votes being cast and neither the pundits…

To qualify for the prime-time 9 p.m. debate, a candidate had to score 2.5 percent or higher in an average of the four most recent national polls, according to Fox News Candidates scoring under that had to receive at least 1 percent support in at least one of the four most recent national polls to qualify for the 7 p.m. debate. Both the undercard and prime-time debate will take place on November 10.

Pataki said in a statement that debate organizers’ reliance on national polls are “a disservice to voters everywhere” and “a clear boost to the worship of celebrity over accomplishment and ideas.”

“We are sincerely disappointed in FOX Business and the Wall Street Journal’s decision to use the NBC/Wall Street Journal poll that only listed ten candidates as options rather than the full field,” Christian Ferry, Graham’s campaign manager, added.


“It is ironic that the only veteran in the race is going to be denied a voice the day before Veterans Day.”

Graham referred to the fact that in the last poll, Graham’s name was among those not listed in the question. Supporters had to volunteer his name.

The candidates at the main stage will appear in accordance with their standing in the polls–Donald Trump will be at center stage, flanked by Ben Carson and Florida Sen. Marco Rubio. Texas Sen. Ted Cruz, former Florida governor Jeb Bush, Carly Fiorina, Ohio Gov. John Kasich, and Kentucky Sen. Rand Paul round out the prime-time lineup.