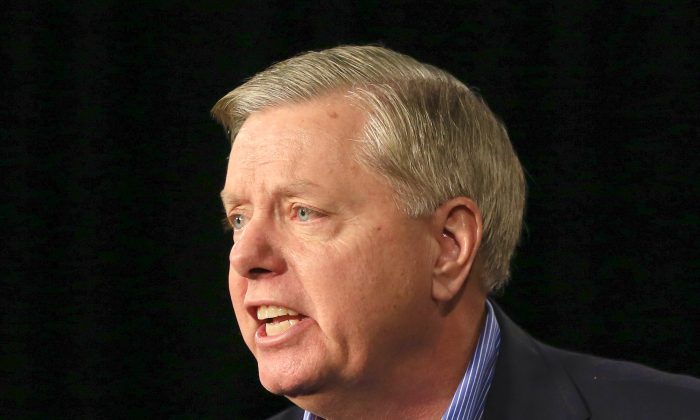 WASHINGTON—Republican Sen. Lindsey Graham ended his 2016 campaign for president Monday, saying he remains committed to working to achieve security for the American people and helping the GOP expand its base.

With just over a month to go until voting begins, the South Carolina senator—the only candidate from one of the four early voting states—posted a video telling supporters “we have run a campaign we can be proud of.” He noted his emphasis on national security and improving the nation’s balance sheet, saying he “put forth bold and practical solutions to big problems.”

In a taped interview broadcast later on CNN, the 60-year-old senator warned that the election is “not about 2016” but instead “an election for the heart and soul of the Republican Party.” He warned that the current GOP front-runner Donald Trump cannot defeat a Democrat like Hillary Clinton “without some major adjustments.”

Having mustered little support in the polls, Graham’s exit will not have an immediate effect on the race in the final stretch before the Feb. 1 Iowa caucuses and the Feb. 9 New Hampshire primary. But his decision could produce a ripple effect in his home state, which follows New Hampshire with a Feb. 20 primary. Graham will likely be a highly sought-after endorsement for those still in the race, though he’s given no indication of who he would back.

By ending his campaign, Graham deprives the GOP field of perhaps its most aggressive military hawk—he said even before the June 1 launch of his campaign that more American servicemen and women “will die in Iraq and eventually in Syria to protect our homeland.” That was often a stark contrast to other candidates who joined Graham in blasting President Barack Obama as weak in his approach to Islamic State militants, yet hedged when it came to questions of ground forces.

Graham also takes with him a wry sense of humor that he showcased on the campaign trail and in debates—though he never did qualify for one of the prime-time sessions, and was instead relegated to the earlier undercard events. His solution to gridlock in Washington: “We’re going to drink more.” It was a lesson he attributed to his upbringing in the bar that his parents owned and to the political friendship between Republican President Ronald Reagan and Democratic Speaker Tip O’Neill.

When Trump gave out Graham’s cell phone number at a South Carolina campaign stop, Graham answered with a satirical video in which he attempts—multiple times—to destroy his phone. Jabbing at Clinton over her use of a private server, he mocked his own computer illiteracy, saying he’s never sent an email at all.

Graham plunged into the contest highlighting his foreign affairs experience in the Senate and arguing that newcomers need not apply for a job that offers no chance for “on-the-job training.” At the time, anything was possible because the mob of GOP candidates had no clear leader. But over the summer, political neophytes like Trump and Ben Carson surged to the front of the pack and forced far better-known candidates, such as former Florida Gov. Jeb Bush, to fight for support.

Urged to run by 2008 GOP presidential nominee John McCain, Graham never gained traction, failing even to qualify for an undercard debate in November.

An Air Force veteran and reservist, Graham has called Obama “a small-minded guy in big times.” After attacks on Paris killed 129 people, Graham pushed for an authorization of military force against the Islamic State that would allow the U.S. to attack the groups’ supporters anywhere, with no time limit.

But as he visited core GOP supporters in Iowa and New Hampshire, Graham did not abandon positions that separated him from the GOP’s conservative base. In New Hampshire, Graham defended his call for an immigration overhaul that includes both improvements in border security and a path to legal status for the millions of people living in the country illegally. “I am not going to give an inch on the idea,” he said.

Graham, a member of the conservative class that swept into control of the House in 1994 has, at times, joined Democrats on other high-profile votes. In October 2013, he voted for a deal that ended a partial government shutdown and raised the nation’s borrowing limit.

He has panned conservatives who have been willing to let the government shut down if their demands aren’t met, saying: “We’re a right-of-center nation. We’re not a right-ditch nation.” Graham also supported both of Obama’s nominees to the Supreme Court. “Elections have consequences,” he explained.