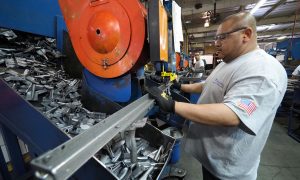 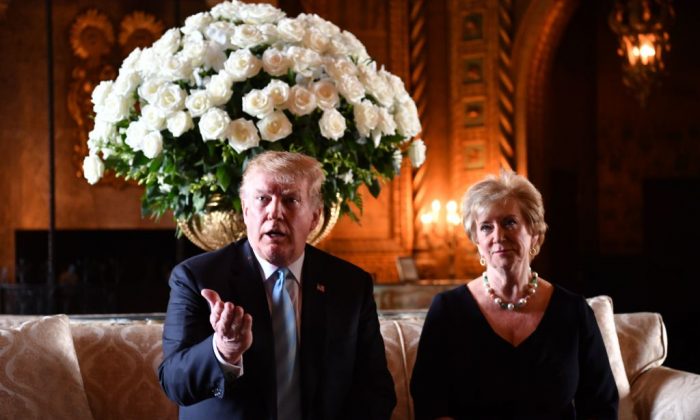 McMahon to Step Down as Head of Small Business Administration, Join Trump Campaign

Trump: 'I knew she was good, but I didn't know she was that good'
By Emel Akan

WASHINGTON—President Donald Trump announced March 29 that Linda McMahon would be stepping down as the head of the Small Business Administration (SBA) and joining his reelection effort.

Speaking at a press conference with McMahon at Mar-a-Lago in Florida, Trump praised the administrator, saying: “I knew she was good, but I didn’t know she was that good. She has been one of our all-time favorites.

“And she’ll be leaving. She’s going to go and help us with a very, very important year and a half that we have coming up. And the reelection, as they call it. And we look forward to that.”

Trump also said that the new SBA head would be announced in the “very near future.”

McMahon and her husband, Vince, were close friends with Trump and backed his presidential run in 2016. According to a Wall Street Journal report, McMahon was a top donor to Trump’s election campaign, donating $6 million to a super PAC. According to the same report, the White House advisers considered McMahon to be a “secret weapon” for the election campaign who could help promote Trump’s pro-business policies around the country.

A few months ago, McMahon was considered a leading contender to replace Commerce Secretary Wilbur Ross.

“It has been an honor to serve the country in your Cabinet, and to serve the administration and the people of the United States and small businesses,” McMahon said during the press conference.

‘Walk the Walk, Talk the Talk’

During an interview with The Epoch Times in January 2018, McMahon said Trump had selected her as administrator because he wanted someone “who’s actually built a business, who can walk the walk and talk the talk.”

She said one of her first objectives as the administrator was to promote SBA’s offerings throughout the country.

“My goal for SBA, first and foremost, is to make sure that it is not the best-kept secret in the country,” McMahon said.

The SBA supports small businesses by providing guarantees for bank loans. It also provides counseling, training, and mentorship programs throughout the country, which are mostly free but are not very well known.

To better promote the agency both outside and within the government, she and her team rolled out a marketing campaign in 2017 called “SBA Reimagined,” with new marketing messages. She also toured the country, visited SBA’s 68 district offices, and met with more than 800 business owners.

During a hearing held by the Senate Committee on Small Business and Entrepreneurship in February this year, McMahon said that she had improved the SBA’s loan processing times.

“By the end of 2018, through better procedures and electronic processing, we were able to reduce our loan processing times by half,” she said. With the new system, the SBA can now process small loans within two to three days and regular loans within seven days.

Small businesses comprise 99 percent of businesses in the country, employing about half of U.S. workers. In fiscal year 2018, SBA loan programs provided more than $30 billion to U.S. small businesses nationwide.

At the hearing, McMahon received praise from both Republicans and Democrats for the agency’s work, particularly in responding to natural disasters.

The ranking member of the Senate Committee on Small Business and Entrepreneurship, Sen. Ben Cardin (D-Md.), touted McMahon’s efforts after the recent tragedies in Maryland.

“Your people were on the ground literally when the waters were still flooding,” Cardin said. “You were there immediately and provided tremendous assistance.”

Trump also touted McMahon and SBA workers for their efforts in helping small businesses that have been hit by disasters.

“I’ve watched Linda and her people, the great job they’ve done helping people that really needed help,” he said. “And you have just been outstanding. … We’re very, very thrilled at the great job you’ve done and at the job you’re going to be doing. We’re staying together.”

McMahon is co-founder and former CEO of World Wrestling Entertainment (WWE). She, along with her husband, founded in 1980 the sports entertainment company, where she served as the president and later CEO.

During a speech at the National Press Club last year, McMahon said that she went through bankruptcy before founding WWE, which was a tough experience early in her career.

“Our house was auctioned off, my car was repossessed in the driveway. I was pregnant with our second child,” she said.

She and her husband came out of bankruptcy and turned their small business into a global company with a current market valuation of nearly $6.7 billion.