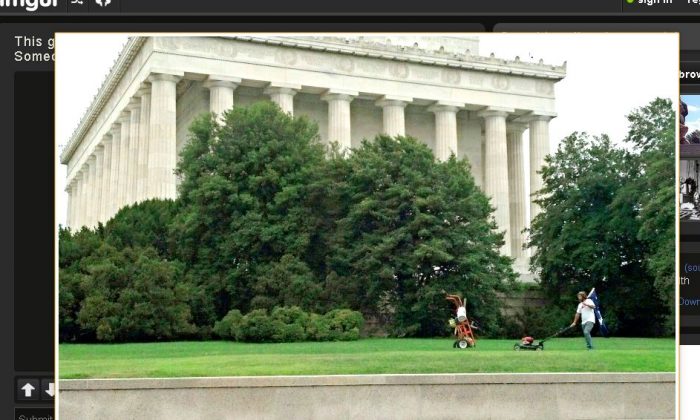 A man was photographed mowing the lawn of the Lincoln Memorial in Washington D.C. on Wednesday amid the government shutdown. The memorial is currently closed.

The bearded man–wearing blue jeans and a white T-shirt–was holding a South Carolina flag and pushing around a small mower. His tool rack is nearby.

“Someone give him a medal,” wrote a Reddit user who uploaded the image.

The man was later identified as Chris Cox of South Carolina, who is usually known as a wood carving artist.

He calls his one-man landscaping crew the Memorial Militia.

“I’m calling on Americans,” the 45-year-old told the Daily Mail. “Find a memorial. Go there. Instead of bringing a picnic basket, show up with a lawn mower and a rake.”

Park Police officers showed up to the memorial with three cruisers and observed the man from a distance. Later, the man was seen packing up his things and leaving.

“He was asked to leave, and he complied,” he said.

Cox said that he couldn’t believe he was asked to leave, especially after all Park Police officers that he encountered–except one–were happy with his work. He had been working in the area for six days.

“The day of the shutdown – I’m watching the news a week ago, and they’re talking about how vulnerable the memorials are,” he said. “So right after the news I threw my bicycle into my truck and I patrolled the memorials all night long. They were right. Anyone could just come up there and spray paint or whatever.”

“I realized that I could serve my country better as a custodian.”

Two officers that approached him on Wednesday were giving him high-fives, but the third wasn’t happy.

Cox told the officer he couldn’t bear to see the National Mall in disrepair.

“He says to me, ‘Well, maybe there should be a picture of the trash cans overflowing in the newspaper. Maybe that would help us.”‘

“I disagree,” Cox told the Daily Mail. “Do you want all the veterans coming here and tripping over banana peels, and dirty diapers, and everything?”

He was referring to the Million Vet March event, set for this weekend in Washington, D.C.