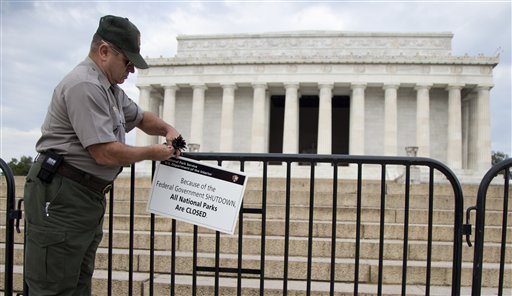 A National Park Service employee posts a sign on a barricade to close access to the Lincoln Memorial in Washington, Tuesday, Oct. 1, 2013. (AP Photo/Carolyn Kaster)
US

Lincoln Memorial Closed During Government Shutdown; Was Open During ’95 Shutdown

Although the Lincoln Memorial is closed during this government shutdown, the memorial was kept open during the last shutdown, which was in 1995 and 1996.

The Lincoln Memorial, the halls of the Capitol, and the Vietnam were kept open, according to a 1995 Associated Press article.

“Those and other similar sites don’t require supervision by federal employees,” according to the story, titled “Tourists shut out – again.”

However, the Lincoln Memorial wasn’t kept open the whole time, according to one photo from the time.

There has also been a dispute over whether the World War II Memorial should be closed. Veterans have entered the memorial today and yesterday despite barricades and park police trying to keep them out, at least initially.