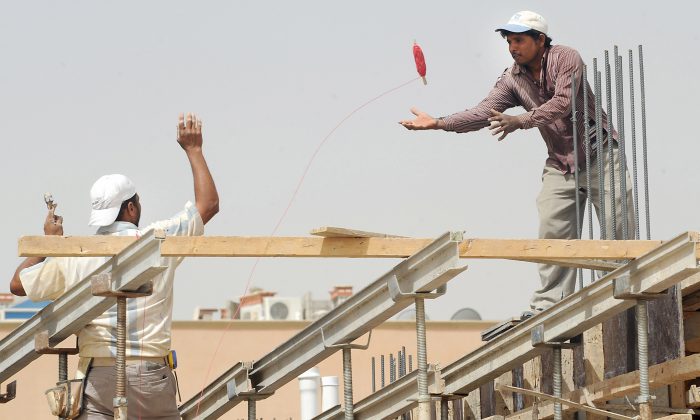 Thanks to the bountiful oil under its desert sands and an equally plentiful supply of foreign labor—skilled and nonskilled—Saudi Arabia has enjoyed a booming economy. Prices of crude oil, nearly $100 a barrel for two years running, have largely spared Saudi Arabia the ill effects of the economic downturn that stalled many nations across the globe. Thanks to the prosperity, the kingdom has also survived, relatively unscathed, the seismic events of the Arab Spring, spurred in large part by feelings of economic deprivation and political marginalization among Arab youths.

But as more young adults come of age and expect jobs, as the potential for competing sources of energy emerge around the globe, leaders must plan for a more austere future, raising questions about the Saudi development model. Early casualties of this Saudi rethink include millions of expatriates who have flocked to a booming oil kingdom. While some have lived and worked in the kingdom for many years, the path to citizenship is notoriously inaccessible and most expatriates return to their home countries at some point.

Some observers have argued that the Saudi government’s seemingly unlimited ability to spend billions to mitigate political, social, or economic crises has been the key to its relative stability. The leaders strive to balance the still-predominant role that oil plays in the Saudi economy with long-term economic planning and demonstrate a commitment to human capital by spending lavishly on education, housing, health care, and job creation.

In various stages of planning across the kingdom are 24 industrial cities intended to provide thousands of jobs as well as housing for the estimated 400,000 Saudis who join the labor force every year. An estimated $134.1 billion is earmarked for water desalination, and electricity-generation projects over the next decade. Some 130,000 Saudis study abroad as part of the King Abdullah Scholarship Program. More than half of the Saudis enrolled in more than 60 colleges and universities across the kingdom are women.

While this may seem like an ideal scenario—a state willing and able to develop its human capital to the fullest and an increasingly well-educated and eager population ready to take the helm of the biggest economy in the Middle East—there is one caveat: Almost 9 million residents of Saudi Arabia, or 32 percent of the population, are non-Saudis who perform everything from menial sanitation work to managing the nation’s top banks. It’s estimated that only about 20 percent of foreign workers are considered highly skilled; in addition, there are up to 2 million illegal migrants. In a society with leaders proclaiming young people are its future, the role for immigrants is not clear.

Long before the Saudi population exploded—from 6.8 million in 1973 to more than 28 million currently—fields in the Eastern Province began gushing oil that proved to be among the cheapest to extract in the world. As oil production and prices kicked into high gear by the early 1970s, Saudi Arabia underwent one of the most rapid transformations in modern history. From a sparsely populated, largely barren dessert, Saudi Arabia today boasts state-of-the-art highways, airports, and communication networks.

Until fairly recently however, the country lacked the manpower necessary to implement this massive undertaking. This so-called miracle in the desert needed a massive influx of foreigners from across the Arab world, Africa, and Asia to turn rapid development into reality.

Recently, government unemployment benefit programs confirmed what many have known for a while: An estimated 600,000 Saudis are unemployed, almost 80 percent of whom are under age 30. Many argue that the private sector, long dominated by non-Saudis, is the logical place to absorb citizen workers.

To avert shocks to the system, Saudi officials implemented a program called Nitaqat, which ranks businesses according to the percentage of Saudi nationals employed. Nitaqat rewards companies for hiring more Saudis and penalizes those that do not. While considered a common-sense approach by many, business owners have protested what they call arbitrary standards that reduce bottom-line profits.

Saudi businessmen have long complained privately about a sense of entitlement among some young Saudis. These youths, they argued, expect high salaries despite inadequate experience and avoid entry-level positions. Many lack the skills necessary to fill technical positions or don’t want to perform menial jobs. Hushed debate among business owners, government planners, and intellectuals remained behind closed doors for years, but the conversation has since moved onto social-media platforms like Twitter and Internet chat rooms as well as the mainstream media.

In early April, the government began cracking down on workers violating regulations requiring them to work only for their original visa sponsor, intended mostly to free up semiskilled jobs that citizens were ostensibly willing to fill. Saudis were quickly reminded of the essential role that migrants perform in the kingdom, as news of the arrests spread and hundreds of shops, restaurants, and private schools closed.

While many supported the crackdown based on a rule-of-law argument, a small but vocal minority expressed xenophobic views, using the Internet not only to rally support for the crackdown but in some cases, launch campaigns vilifying specific groups of non-Saudis, especially illegal migrants who have long lived on the margins of Saudi society. Some pushing this “Saudis first” agenda portrayed illegal migrants and workers as veritable “locusts,” invading the nation and engaging in illegal activities, including organized criminal gangs, prostitution, and even witchcraft.

As the animus intensified, other Saudis advised their countrymen not to transfer this hostility to the millions of legal workers who have played a pivotal role in the kingdom’s development and urged Saudis to treat immigrants as guests. Among writers asking Saudis to look at themselves was Khalaf Al-Harbi in the Saudi Gazette: “The fault is within us and not within the foreign workers.”

In the meantime, an estimated 800,000 Yemenis, Indians, Pakistanis, and Filipinos among others deported over the past 18 months have added a truly global dimension to what Saudi authorities see as necessary measures to reduce a 12 percent unemployment rate. Officials in the home countries for some nationals voice concern about their own ability to absorb tens of thousands of people into an already tight job market, with leaders in Yemen and the Philippines acknowledging that their economies rely on overseas remittances.

An already emotionally charged discourse was complicated by a number of high-profile cases of alleged abuse of foreign domestic workers by Saudi employers, along with equally troubling reports of foreign caretakers abusing or even killing children in their care. Some Saudis have even blamed Arab members of the Muslim Brotherhood who fled places like Egypt and Syria in the 1950s and 1960s of “exporting” a brand of militant Islam into the kingdom.

In April a government representative reportedly told a local newspaper that imams in mosques in the Mecca region must be Saudi nationals, though prominent foreign clerics continue to preach on a number of satellite television channels.

The uncertainty and panic that followed the crackdown prompted King Abdullah to issue a three-month grace period for illegal workers to rectify status. Still, difficult decisions await Saudis about the millions of non-Saudis in the country legally as the government looks to resolve high unemployment and secure work for its own youth.

Fahad Nazer is a political analyst at JTG Inc. in Vienna, Va. His writing has appeared in the International Herald Tribune, the Daily Star of Lebanon, The Khaleej Times, and Al Monitor, among others, and was also recently featured on the website of the Council on Foreign Relations. With permission from YaleGlobal Online. Copyright © 2013, Yale Center for the Study of Globalization, Yale University.

Fahad Nazer
Follow
Fahad Nazer is a political analyst at JTG Inc. in Vienna, Va. His writing has appeared in the International Herald Tribune, the Daily Star of Lebanon, The Khaleej Times, and Al Monitor, among others, and was also recently featured on the website of the Council on Foreign Relations. With permission from YaleGlobal Online. Copyright © 2013, Yale Center for the Study of Globalization, Yale University.