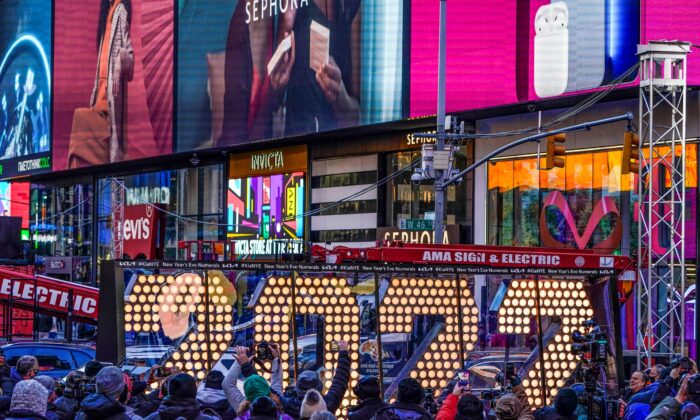 The city said it would limit the number of people it lets into Times Square to witness a 6-ton ball, encrusted with nearly 2,700 Waterford crystals, descend above a crowd of about 15,000 in-person spectators—far fewer than the many tens of thousands of revelers who usually descend on the world-famous square to bask in the lights, hoopla, and shower of confetti during the nation’s marquee New Year’s Eve event.

“We are very excited to welcome back visitors to Times Square this New Year’s Eve,” said Tom Harris, the president of the Times Square Alliance. “Our goal is to have a safe and responsible event for the world to see.”

The annual ball drop takes place Friday, as the clock ticks into midnight and ushers in the new year, an occasion usually commemorated with Champagne, clinking pints, joyous embraces, and hopes for better times ahead.

Doubts swirled whether the city would have to cancel this year’s bash, as the city posted record numbers of COVID-19 cases in the days leading to it. Last year’s ball drop was closed to the public because of the outbreak. Some cities like Atlanta had decided to cancel their own celebrations.

But New York City Mayor Bill de Blasio, who will relinquish oversight of the nation’s most populous city at the stroke of midnight, said the festivities at Times Square would “show the world that New York City is fighting our way through this.”

Officials said those attending the spectacle would have to wear masks and show proof of vaccination. Organizers had initially hoped that more than 50,000 revelers would be able to join in, but plans were dramatically scaled back because of widespread infections.

Rap artist and actor LL Cool J was supposed to be among the performers taking the stage in Times Square Friday night, but announced he would pull out of the event because he had tested positive for COVID-19.

New York City’s incoming mayor, Eric Adams, is scheduled to take his oath in Times Square soon after the ball drop. He expressed hope Thursday that 2022 would be “a new beginning of our resiliency.”