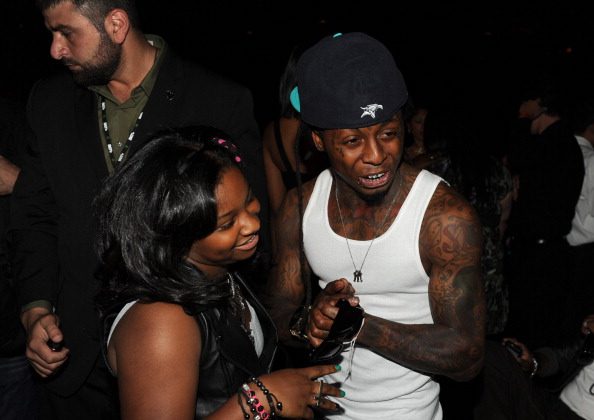 Reginae Carter (L) and rapper Lil Wayne in the audience during the BET Awards '11 held in Los Angeles, California on June 26, 2011. The teenage daughters of rappers Lil Wayne and Birdman are collaborating to write a teen novel to inspire literacy. (Photo by Kevin Winter/Getty Images)
Entertainment

Lil Wayne isn’t dead, but there’s a video being shared on Facebook, saying “RIP,” which has caused many to panic.

The rapper has been the victim of online death hoaxes in the past.

Lil Wayne was involved death scare earlier this year after he was hospitalized for seizures. Celebrity news website TMZ reported at the time that he was on the verge of dying and received his last rites.

The report was inaccurate as the rapper survived and appears to be doing well, and he even appeared alongside Floyd Mayweather in his fight against Saul “Canelo” Alvarez in September.

n June, Wayne told Jimmy Kimmel on his show: “Was serious because I was upstairs and my homies were downstairs, and they didn’t even know that I was up there seizing. One of them just was like, he hasn’t come down in a minute.”

He said, “It’s just a private matter that I’ve been dealing with my whole life. We’re so used to it happening, so my doctors prepped all my homies.”

He added: “This isn’t my first, second, third, fourth, fifth, sixth, seventh seizure. I’ve had a bunch of seizures; y’all just never hear about it. This time it got real bad because I got three of ‘em in a row, and on the third one, my heart rate went down to, like, 30 percent. Basically, I could’ve died soon. That’s why it was so serious. The reason being for the seizures is just plain stress, no rest and overworking myself. That’s typical me, though.”

According to Google Trends, more than 200,000 people searched for reports about it on Monday.

A number of users on Facebook and Twitter shared the video. On Google Trends, more than 200,000 people searched for reports about it on Monday.

Added another: “Lil Wayne dead or this a wine up ?”