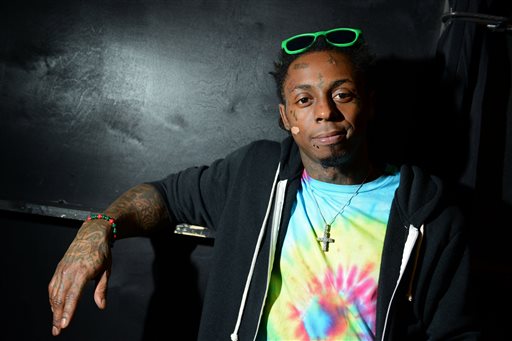 In this Feb. 1, 2013 file photo, recording artist Lil Wayne meets fans and celebrates his contemporary street wear apparel brand TRUKFIT at his hometown Macy's, in New Orleans. The Rev. Al Sharpton says a meeting he held with PepsiCo Inc. officlals and members of Emmett Till's family was “positive.” Sharpton says in a statement PepsiCo officials apologized to the Till family at the Wednesday morning meeting at company headquarters in Purchase. PepsiCo and Lil Wayne ended their commercial relationship last week over vulgar lyrics the rapper included in a song that referenced Till, a black teen who became a civil rights icon after being killed while visiting Mississippi. (Photo by Jordan Strauss/Invision/AP, File)
News

Lil Wayne and the Cash Money Records label he’s signed to might be entering the world of sports agency like Jay-Z.

According to Forbes, Cash Money filed a trademark application with the U.S. Patent and Trademark Office to get registration for “Visionaire Sports Group.”

The filing would entail “sports agency services, namely, management, representation and promotion of professional athletes; business management of sports people; talent recruiting services in the field of sports,” and anything ventures related to sports.

“Whether Cash Money Records and/or Young Money Entertainment decides to partner with an existing agency or attempts to make inroads in the world of athlete representation remains to be seen. However, what appears to be quite clear is that at least one of the two entities is taking the idea of sports agency quite seriously,” Forbes reported.

Last month, Jay-Z’s Roc Nation got Robinson Cano, a former Yankees second baseman, to sign with the Seattle Mariners for $240 million for 10 years.

According to reports several days ago, Louisville quarterback Teddy Bridgewater is considering signing with Roc Nation. Two sources told NationalFootballPost.com that Bridgewater, who announced his intentions to enter the NFL draft this year and could be the No. 1 overall pick, was looking to sign with Jay-Z.