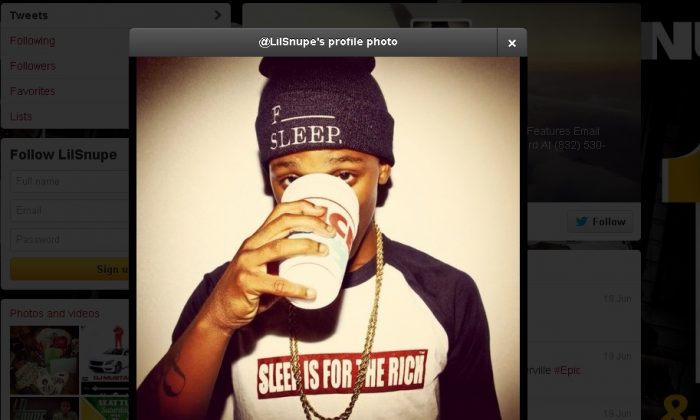 Lil Snupe’s funeral was held over the weekend–just weeks after the young Louisiana rapper was shot and killed.

The suspect in the shooting, 36-year-old Tony Holden, surrendered after he was named by police as the alleged gunman. Snupe was gunned down in Winnfield, Lousiana, on June 20.

Mourners showed up to the rapper’s funeral around three hours early, according to the Times.

Rapper Meek Mill was seen in attendance. According to the Inquistr, Snupe had his big break when he met Meek Mill, passing along a demo tape to him.

“I’m never one to talk (at funerals),” Mill told the paper. “I saw something in him. His demo tape spoke to me. I saw myself in him.”

Meek had signed Snupe to his label within an hour of meeting him.

“He was just a kid with a dream,” friend Doniquia Smith told KNOE-TV. “And he just wanted to get out of here. That’s all there is to it.”

Friend Caitlyn Anderson described him as “a real laid back person to be around, he always liked to crack jokes, just mess with type of stuff, like pull pranks on you, his whole life.”

His biological father Charlie Brown, who is incarcerated, delivered a message.

“He came from nothing,” Charlie Brown wrote in a letter. “He taught the young to never make excuses. When the doors open for me, the world will forever hear Lil’ Snupe!”