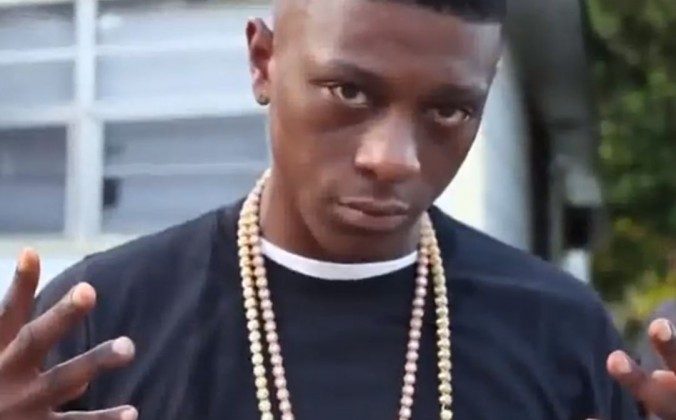 Lil Boosie in his music video, 'We Out Chea.' (YouTube screenshot)
Entertainment

Lil Boosie, the Louisiana rapper, was released from prison, according to local reports.

Boosie–born Torrence Hatch–was incarcerated after pleading guilty on drug charges in 2009. He was, however, exonerated on the more serious charges of murder.

WAFB-TV reported that Boosie was released from Louisiana State Penitentiary in Angola on Wednesday night. He got out at 7:10 p.m. local time.

Angola State Penitentiary Warden Burl Cain confirmed that he was released to the news broadcaster.

He was taken to a sheriff’s department facility in St. Francisville. His family was there waiting for him, it was reported.

The Louisiana Department of Corrections Wednesday said that his official release date was May 20, 2014.

Boosie is slated to be at a press conference in New Orleans on Monday, hosted by Atlantic Records.

“He will absolutely be there,” a representative with Atlantic Records told NOLA.com. “He’ll be speaking to the press for the first time … after his release.”

Regarding whether he signed with Atlantic, the representative only said, “(Lil Boosie) is actually going to be clearing all that stuff up for everybody there, so I’m going to let him relay that information.”

In early February, Boosie told BET: “I can’t wait to get out and squash all this [expletive],” referring to rumors about performing and possibly about his brother booking dates for him to perform. “I think the folks are waiting for my return to the game,” he added.

Boosie said that while in prison, he wrote dozens–or possibly hundreds–of songs. The music, he added, will show his growth as “a son, a father, a man.”

Fans have been eagerly awaiting his release, with #FreeBoosie trending on Twitter a number of times in recent months.

A few weeks ago there were false news reports saying that Boosie was released from prison, and he was out for 30 minutes before being sent back for child support payments. The fake report was originally published on “satire” urban news website Cream BMP Daily.