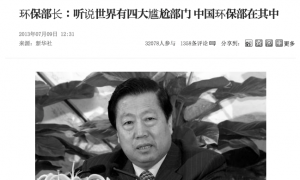 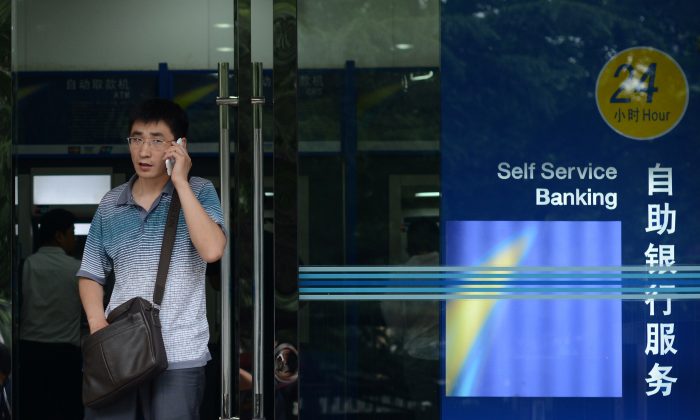 A man talks on a mobile phone at the entrance of a bank in Beijing on June 25, 2013. That morning the Chinese stock market tumbled 3.80 percent, extending the previous day's hefty losses as traders fretted over a liquidity crisis in the country's banking system. (Wang ZhaoAFP/Getty Images)
China

Recently, media outlets in mainland China reported a deputy prime minister held an urgent 5 a.m. meeting to discuss plans for responding to China’s economic crisis. The reports underlined the feeling that China’s economy is at a tipping point.

The State Council has rushed to seek advice from the private sector. Some think tanks and commercial banks have submitted over ten reform plans, and there are many ongoing discussions and forums. These plans describe a critical financial crisis in China and call for a reform of interest rates that will be more market-oriented.

The General Office of the State Council has issued a report titled: “Guidance on Financial Support for Economic Restructuring,” which states the need for “expanding private capital into the financial sector.”

“Actually the shortage of money took the authorities by surprise and they had to ask the people for help,” said Professor Frank Xie of the Aiken Business School at the University of South Carolina. “However, we can assume, based on the nature of the communist regime, that it will not really allow private capital to hold controlling power in the banks, but only to invest. So the Party is merely using the people’s money without giving them the rights.”

Xie pointed out that the CCP fears it will lose control over China as soon as it loses control over the economy, and therefore it will not implement a complete marketization. During the recent money shortage, the fact that the new Chinese government hurriedly used 500 million yuan (US$81.5 million) to prop up the stock market provided good evidence of the Party’s intention to limit market forces, Xie said.

Beijing University Economics Professor Xia Yeliang said: “The Chinese financial system shows some weak signs, as the appearance of a money shortage shows its poor degree of marketization. For a system with an open market, liquidity is very important and once there is a liquidity problem, it means the financial system has systematic problems.”

A new term, “Likonomics,” appeared in the media recently—the term is named for Premier Li Keqiang. This policy is understood to consist of retreating from economic stimulus policies, deleveraging the financial sector, and structural reform, which are all aimed at leading the Chinese economy to get back on track with the market.

Xie said that the economic difficulties China confronts now are caused by the CCP’s failure when it first promoted so-called economic liberalization to introduce fair competition, the rule of law, and media supervision of the free economy.

“The crises happening in China today, both economic and financial, are found where the CCP’s dictatorship clashes with the market,” Frank Xie said. “The current promotion of market-oriented interest rates without changing the political system and the entire social system certainly will not go far.”

“One thing we need to ask is why is he [Premier Li] doing this? If it is to save the Party, he is destined to fail because, with the interests of the CCP involved, he will not truly think for the Chinese people or truly resolve any current problems,” Xie said. “Only by breaking the CCP’s one-party dictatorship and autocratic system can China be saved and new hopes for China’s financial sector emerge.”

While the State Council announced the permission for private capital to enter the banking sector, it also publicly stated that private banks will have to operate at their own risk.

Xie said that such an approach contrasts sharply with the generosity the CCP showed when state-owned banks ran into trouble. It also shows that the CCP is not truly hospitable to private financial institutions.

The state-owned banks dared to act recklessly and involve the whole Chinese economy in the current crisis precisely because of the CCP’s partiality for those banks, Xie said.

In democratic countries like the United States, Xie said, all banks are privately owned and closely attuned to the market, relying somewhat on deposit insurance and the government’s supervision to enable their depositors to feel secure.