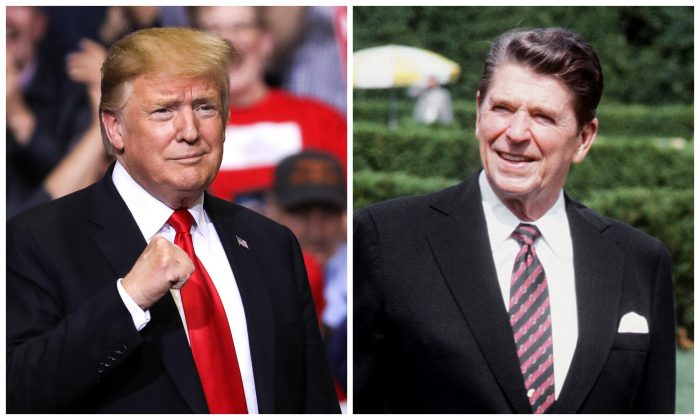 Like Reagan, Trump and the Economy Are Winning Over Millennials

The latest Zogby poll shows a majority of millennials now approve of President Donald Trump’s job performance. That is a stark change from recent years, and just like President Ronald Reagan in the 1980s, the rising economy is changing their mind.

It has been 30 years since Reagan was president. Much has changed since then. The federal budget was a quaint $590 billion when he was elected (about $1.5 trillion in today’s dollars) and will be $4.75 trillion in 2020.

The Soviet Union is gone and the European Union has been on the world stage since 1993. At home, social issues have taken center stage and the ideological dividing lines between us have hardened in this divided era. Voting patterns are not quite the same either.

A good deal of that relates to social views. For instance, 59 percent of Generation Z believe that “forms or online profiles that ask about a person’s gender should include options other than ‘man’ or ‘woman,’” while less than 40 percent of baby boomers hold that view. Half of millennials support the Generation Z view.

According to that same January Pew poll, few Gen Zers and millennials (30 percent and 29 percent, respectively) “approve of the way Donald Trump is handling his job as president.”

If we fast forward to today, according to a May Zogby Poll, among voters aged 18–29, 51 percent approve and 46 percent disapprove of Trump’s job performance. That represents a marked improvement among those voters since January.

According to Zogby, Trump’s improved numbers are based on “[voters’] outlook on the economy the next four years.”

Keep in mind that in the 2016 election, according to the CBS/New York Times polling, Hillary Clinton received 55 percent of that vote while Trump received only 36 percent of it. That was a 19 percent advantage for the Democrats.

All of which harkens us back to 1980. That year, Ronald Reagan faced off against Jimmy Carter. Despite a very weak economy and the view that Carter was an ineffective president, 18–29 year olds supported Carter over Reagan roughly 45 percent to 44 percent—with John Anderson receiving 11 percent of their vote.

Just four years later, however, amidst an economic revival, 18–24 year olds supported Reagan over Mondale 61 percent to 39 percent and 25–29 year olds did the same by a margin of 57 percent to 43 percent. That was quite a jump for Reagan and played a role in his landslide victory over Mondale.

Trump’s improved standing among millennials could be important long term because how someone first identifies as a voter tends to stick with them. For instance, in 2008, 18–29 year olds went for Barack Obama over John McCain 66 percent to 32 percent. Now, millenials rate Obama as the best president of their lifetime while baby boomers still rate Reagan as the best.

Next fall, if Trump can improve his standing from 36 percent among younger voters to a draw with the Democrat nominee, it could not only help decide the 2020 election, it could change politics for a generation.