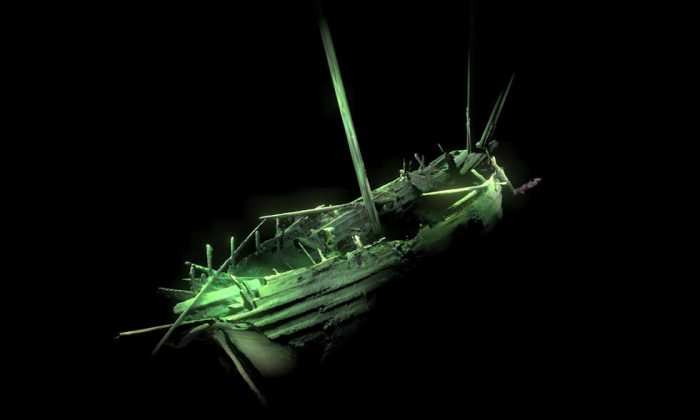 A 3D computer image of the shipwreck in the Baltic Sea. (Deep Sea Productions/MMT)
archaeology

One of the “best-preserved” Columbus-era ships to be discovered in modern times—complete with swivel guns and a bilge pump—has been revealed via 3D mapping technology.

Researchers at a British university mapped the shipwreck of “great archaeological and historical significance” which had been well-preserved in the brackish waters of Europe’s Baltic Sea.

“It’s almost like it sank yesterday—masts in place and hull intact,” said Dr. Rodrigo Pacheco-Ruiz, one of the researchers at the University of Southampton.

“On the main deck is an incredibly rare find—the tender boat, used to ferry crew to and from the ship, leaning against the mainmast,” said Pacheco-Ruiz in a statement. “It’s a truly astonishing sight.”

The ship was detected by radar back in 2009 and was mapped this year as part of work carried out by survey specialists MMT.

“This ship is contemporary to the times of Christopher Columbus and Leonardo Da Vinci,” said Pacheco-Ruiz. “Yet it demonstrates a remarkable level of preservation after 500 years at the bottom of the sea, thanks to the cold, brackish waters of the Baltic.”

The researchers have not revealed the exact location of the wreckage or specified where they believe the ship was built exactly.

However, they did compare the wreck to that of famous Swedish warship called Mars, which was also found at the bottom of the Baltic Sea where it had been resting for 450 years.

“Unlike the scattered remains of the Mars, which exploded in battle, this newly discovered wreck lies on the seabed with her hull structure preserved from the keel to the top deck and all of her masts and some elements of the standing rigging still in place,” said the university statement.

“It is rare to find a ship in such an astonishing condition that predates the larger and more powerful vessels involved in the later Northern Seven Year’s Wars (1563-1570)—a period of great importance which defined the path of modernization of Scandinavian nations,” said the researchers.

Researchers from the same department in Southampton University last year were part of a team that discovered the world’s oldest intact shipwreck, 2,400 years old, in the Black Sea.

The ship was found at a depth of 2 kilometers (about 1.25 miles), using state-of-the-art technology previously only available to oil, gas, and renewable-energy companies.

The ship is designed in the style of an ancient Greek trading vessel known only from ancient artworks, until now.

It has been officially radiocarbon-dated to 400 B.C., after being first discovered by the Black Sea Maritime Archaeology Project (Black Sea MAP) last year, according to a statement on Oct. 23.

“A ship, surviving intact, from the classical world, lying in over 2 kilometers of water, is something I would never have believed possible,” said University of Southampton professor Jon Adams, the Black Sea MAP’s principal investigator in a statement at the time.

“This will change our understanding of shipbuilding and seafaring in the ancient world,” Adams said.

According to the statement, the vessel design was “previously only seen on the side of ancient Greek pottery such as the ‘Siren Vase’ in the British Museum.”

The “Siren Vase” depicts the moment that Odysseus, the hero of Homer’s classic, is strapped to the vessel’s mast as it takes him past the sirens who would lure him to his death. That vase has been dated to 480 B.C.

The ship was able to survive intact for more than 2,000 years because of a lack of oxygen in the water where it lay. The Black Sea is the largest body of water in the world with a meromictic basin—meaning deep waters don’t mix with the upper layers that get oxygen from the atmosphere.