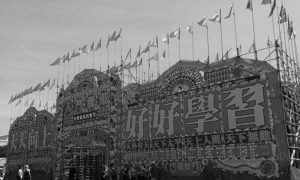 For the last three years, the Chinese communist leadership has fought a bitter campaign against corruption in its ranks. Corruption, leaders say, could bring about the downfall of the Party and the nation. Few measures have been spared: detention and torture by the Party’s own secret police force, forced confessions on national television, expulsion from the Party, and the odium of peers are all among the consequences that wayward officials face.

These centers are called “anti-corruption education bases.” They are being rolled out across the country in an effort to warn and indoctrinate the millions of Party members who are made to traipse through.

Clearly, great work has gone into the design. Sometimes, the disgraced officials featured in exhibits are personally known to visitors.

Zhou Liangluo, a district chief from Beijing who received a commuted death sentence in 2008 for taking bribes, is one of them. “Zhou’s former colleagues were very much moved when they saw his files,” staff said.

At the anti-corruption base in Haidian District, Beijing, officials are walked through interactive, multimedia exhibits intended to make them sense the abject fate that awaits the corrupt.

The “base” was set up in the district’s Public Security Bureau detention center, and not by accident: the anti-corruption museums and exhibits are either built on or made to resemble prisons.

Here will be experienced the agony of losing one’s freedom.
— Chinese anti-corruption staff

A journalist working with the Know Politics Bureau, part of the state-run Beijing Youth Daily that operates a channel on China’s social media network WeChat, interviewed anti-corruption personnel at the Haidian District base. The exhibit begins at the very entrance.

“The heavy prison door is a door of warning. Its opening and closing strikes into the soul,” the worker said. “Here will be experienced the agony of losing one’s freedom.”

Included in the experience are recordings of the confessions, genuine and forced, of fallen officials. Videos showing the gaunt and solemn faces of the condemned appear intended to foster fear in the hearts of the visitors.

According to Qin Xiaoyong, the manager at a Beijing company that builds the anti-corruption bases, thunder and lightening sounds were employed to complete the atmosphere and reinforce the lessons.

The Haidian District anti-corruption base was completed and opened last April. Since then, nearly 7,000 Party members and cadres from over 230 work units have visited the center. Reservations have been booked full to the end of the year. Other Beijing districts are in the process of constructing their own anti-corruption bases.

The educational base in the city of Suqian, Jiangsu Province, features a mock prison experience. Visitors are put through scenarios placing them in the shoes of the convict. Included are simulated visits by bereaved relatives. According to staff speaking with a Know Politics reporter, the center has 200 to 300 genuine case files at the exhibition. To make the lessons more broadly instructive, the majority of the cases selected is those of local, low-level officials.

The State-Produced Opera That Is Bringing Chinese Officials to Tears
Thunder and lightening sounds were employed to complete the atmosphere and reinforce the lessons.

Similar interactive exhibits at the Haidian District center sport plotlines involving bribery in social settings. “This is intended to have the visitors think about their behavior and make the right decision,” anti-corruption staff at the Haidian Center said.

According to the staff, the Haidian exhibits are primarily intended for functionaries working in district-level departments and state enterprises.

A touring exhibition reportedly visited a total of 55,418 work units and departments around the country and received more than 2.16 million visitors in 2011.

In one case, elementary schoolchildren were invited to attend an exhibit held at a local procuratorate in Weifang, Shandong Province. The students asked questions like “What’s the job of the procuratorate?” (The equivalent to China’s public prosecutor) or “Once they’re in, can they get out?” (Not usually).

“This is my first time visiting the procuratorate,” said one student. “I thought it was a mysterious place and was very curious about it. Now I know how auntie and uncle prosecutors handle cases and capture the bad people. I’ve upgraded my knowledge today.”

Outsourcing Re-education to the Private Sector

As part of China’s 12th Five-Year Plan, the CCDI and the Supreme People’s Procuratorate enlist the services of private firms in the design and construction of the anti-corruption educational bases.

Most of the projects are being carried out under the auspices of local procuratorates; the firms themselves are tasked with collecting data, hosting the exhibitions at their facilities, and organizing tour groups.

Specialists work with agencies such as the Central Commission for Discipline Inspection, procuratorates, and Public Security Bureau to compile case files and information—including filmed confessions by sacked officials—to be presented at the exhibits, a staff member from the Sanyueyu Communication firm told a Know Politics reporter.

Li Yingyu, the founder of Sanyueyu, which runs several education bases, said he’s been an education outsourcer to the Central Commission for Discipline Inspection for many years—there was almost no competition a while back, he said. That changed in 2012, though. “Some decoration and renovation companies, and builders whose businesses failed, then got into the anti-corruption base business. There are also some officials who’ve entered this field.”

According to the director of the education base in Suqian, the new base now includes an exhibition hall and lecture rooms for experts, prosecutors, and some of the sacked officials to talk about their work and experiences.

Speaking to a Know Politics journalist, the Suqian center director said, “The exhibit content is richer. The e-files are constantly updated with cases of both positive and negative lessons. There are files on cases of repentance, and there’s also discussion.”

“Those who were detained and investigated and tried will appear in the exhibition,” said the staff of another education company. One of its latest video additions is the trial of Zhou Yongkang, the Communist Party’s former security czar and one of the most powerful men in China. In June he was sentenced to life in prison, apparently after having been denied his jet black hair dye, often used by Chinese leaders, during his time in detention. “We collected the CCTV video showing the gray-haired Zhou Yongkang,” he said. “It’s ready to be shown.”