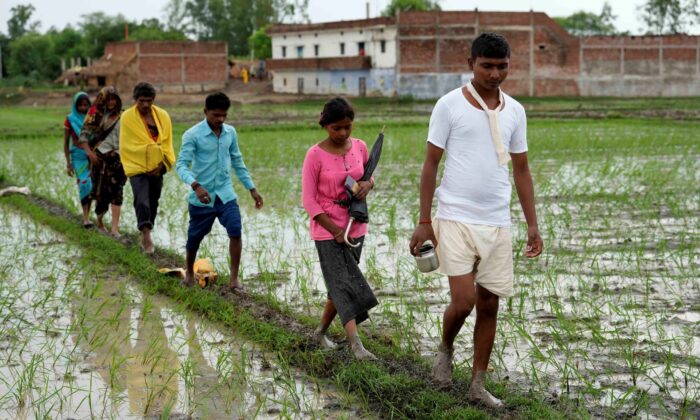 Sushil Kumar Bind leads his family members towards the field where his wife Khushboo who was killed by lightning on July 25 at Piparaon village on the outskirts of Prayagraj, in the northern Indian state of Uttar Pradesh, on July 28, 2022. (Rajesh Kumar Singh/AP Photo)
India

LUCKNOW, India—Seven people, mostly farmers, were killed by lightning in a village in India’s northern Uttar Pradesh state, police said Thursday, bringing the death toll by lightning to 49 people in the state this week.

The farmers had taken shelter under trees during a drenching monsoon rain when they were struck by lightning Tuesday and died instantly. The victims included four members of a family and some cattle grazers near the city of Kaushambi, according to police officer Hem Raj Meena.

The high death toll has prompted the government to issue new guidelines for how people can protect themselves during a lightning storm, said state government spokesman Shishir Singh.

Col. Sanjay Srivastava, whose organization “Lightning India Resilient Campaign” works with the Indian Meteorological Department, said lightning has killed nearly 750 people across India since April. That includes 20 people who died in eastern Bihar state in the past two days and 16 in Madhya Pradesh state in central India earlier this month.

More than 200 people have been killed in heavy downpours and mudslides in Indian states including Assam, Manipur, Tripura, and Sikkim, while 42 people have died in Bangladesh since May 17. Hundreds of thousands of people have been displaced in the monsoon season.