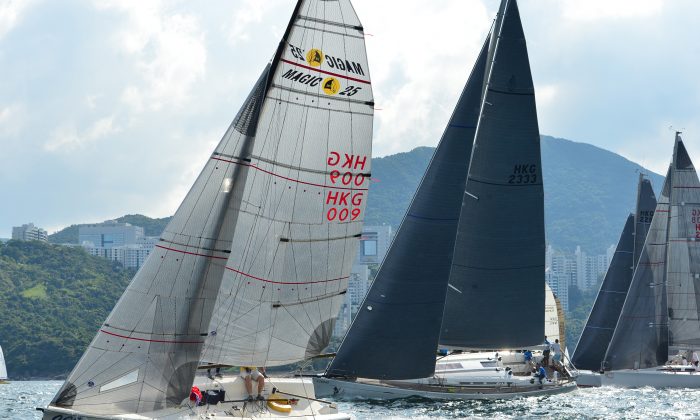 IRC and Sportsboat divisions set off on Race-2 of the Summer Saturday Series on Saturday June 13, 2015. ‘Lighthorse’ (Sail HKG 2333) won double line honours and double first places in the first two races of the series of 9-races in total, running through to August 8, 2015. (Bill Cox/Epoch Times)
HK Sports

‘Lighthorse’ in the Limelight Again

With three well balanced starts per race: IRC and Sportsboats (12 boats), HKPN (11) and Dragon Class (9) competitors and two races during the afternoon produced an enjoyable afternoon. Race Officer of the day, Gerry Daughton had some difficulty in deciding a suitable course as a large Hong Kong Sailing Federation flotilla had already staked out a number of courses for its “Festival of Sport” Regatta, but after some manoeuvring a windward/leeward course was set to suit the southerly airstream.

Races proceeded in orderly fashion with all boats completing a two-lap course. The IRC and Sportboats started first completing a longer course. Sportboats, although sailing as a separate Division were competitive on time with all but the fastest IRC boats.

Race-2 was almost a duplicate of Race-1 with all 8-IRC competitors finishing in the same order, except “Vixen” slipped down the order to 6th place.

HKPN
In the HKPN Division “Kiasu” took line honours in both races but on corrected time, “DEA” came 1st, “Ichiban” was 2nd and “Kiasu” 3rd.

Dragon Class
The 9-boat Dragon Class fleet was as competitive as ever D47 “Wudi” forged ahead of the fleet in Race-1, finishing 1-minute ahead of D38 “Phylloong” with “Maiden Hong Kong” next followed by “Wyuna”, “Eaux Vives”, “Celines”, “Shiva”, “Puff” and “Johan”.