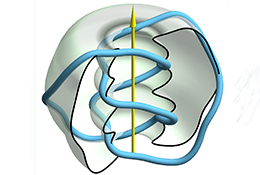 While it has previously shown that light can be tied into knots, this is the first time that researchers have caused it to spontaneously tie itself up, forming little cores of darkness in bright laser beams. (Australian National University)
Beyond Science

Light Can Spontaneously Twist Into Knots

A U.K.-Australian research team is simulating knots in light with potential applications for a range of systems including quantum computing and advanced modern optics.

The physicists have produced a model that generates optical vortices with dark cores in a laser beam, and those vortices can then tangle into knots.

“Apart from their curiosity value, what’s really interesting and useful about these knots of darkness is that they show you what the power flow is doing,” said study co-author Anton Desyatnikov at the Australian National University, in a press release.

“It is part of the incredible progress science is making in the field of optics; we’re beginning to do things with light that would have once seemed impossible.”

Unlike previous research that artificially produces knots in light, the new paper is based on knots that form spontaneously by themselves, rather like how power cords can get knotted up.

However, Desyatnikov notes that, unlike electrical cables, it is not easy to get light to form knots.

”Scientists have found that inducing knots to form in laser beams by introducing perturbations in the form of laser speckle only very rarely induces knots,” he explained.

“Our models suggest that you have to get the key parameters of the light in a certain range before you can easily tie the light in knots; but once you do, the knots are virtually guaranteed.”

However, the researchers cannot predict where exactly the knots will form.

“Just that under these specific circumstances, the optical vortices will spontaneously nucleate and tie themselves into little knots,” Desyatnikov said.

The study was published in Nature’s Scientific Reports on Oct. 25, and can be accessed here.