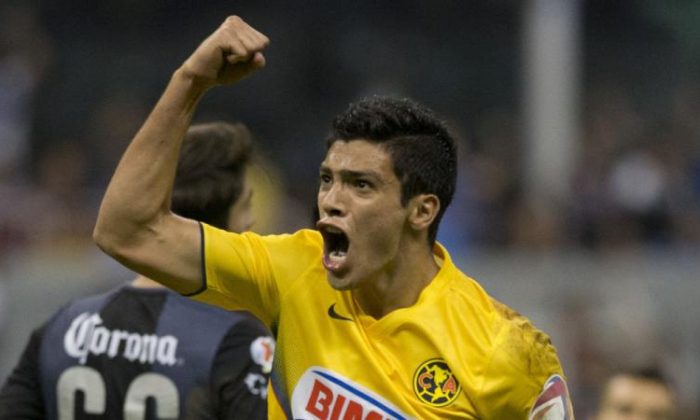 Talk of Carlos Pena, Isaac Brizuela, Miguel Layun and others moving from the Liga MX to Europe was rife ahead of the World Cup. Over two weeks after the event, however, and things seem to have gone a little quiet for both Mexican players hoping to make the jump over the pond, and for those already there.

The telenovela of the summer so far is Alan Pulido, who has been banished from Tigres’ first team squad and is currently supposed to be training with the club’s third division team.

Details about what exactly has happened are sketchy, with Tigres saying Pulido has a contract that he violated and that he must accept the punishment.

Pulido, however, seems to be keen to force a move to Europe (Olympiakos and Standard Liege are interested) and did say last April that his contract was running down. Tigres have denied that offers exist and strenuously repeated that he must respect his contract.

It is a murky situation and Tigres will either have to concede defeat and negotiate or Pulido will have to apologize to get back playing in the first team.

Over at America, Raul Jimenez’s saga with Porto continues, with coach Antonio Mohamed admitting that the player is distracted – even if he did scored a neat goal on Saturday – by not knowing whether he’ll be staying or going in coming weeks.

The club has said it wants to retain Jimenez for the next six months if possible, but that is unlikely to be attractive to Porto if it does lose Jackson Martinez to a bigger European club and sees the America player as the Colombian’s replacement.

Another player that could make the jump is Chivas’ Nestor Vidrio, who is garnering interest from Sporting Lisbon, but reports in Mexico suggest the club is reluctant to let him go until January.

Pachuca’s Jurgen Damm has attracted interest from Jose Mourinho’s Chelsea, with Los Tuzos rejecting an offer last weekend and saying the player has to fully establish himself with the club before being allowed to move.

In Europe, Guillermo Ochoa’s final destination remains a mystery, although clubs like Liverpool, Arsenal and Atletico Madrid appear to have been crossed off the list.

With European clubs’ preseasons now in full flight, Ochoa’s options appear – again according to reports – to be Malaga or Getafe in La Liga, and Marseille or Bastia in France.

They aren’t the big names touted immediately after Ochoa’s impressive displays at the World Cup, which is perhaps surprising considering the ‘keeper is available on a free.

Then there is Javier Hernandez.

The 26-year-old came off the bench for Louis van Gaal’s Manchester United against Roma on Saturday, but ESPN reported Inter is showing real interest and Atletico Madrid has also inquired about Chicharito.

Van Gaal is likely to want to see more of Hernandez in coming weeks as he gets to grips with his new squad and it is unlikely that a potential deal will be done soon, unless Hernandez presses the issue by handing in a transfer request and/or talking to the press about it.

While Andres Guardado seems to be staying at Valencia, the other Europe-based mover could be Javier Aquino, who has been linked with a loan move to Celtic in order to free up one of the three non-EU spots at Villarreal.

There is still over a month until the transfer window closes in Europe and things can move quickly, but so far Jonathan Dos Santos signing for Villarreal has been the only transfer of note for Mexico followers.