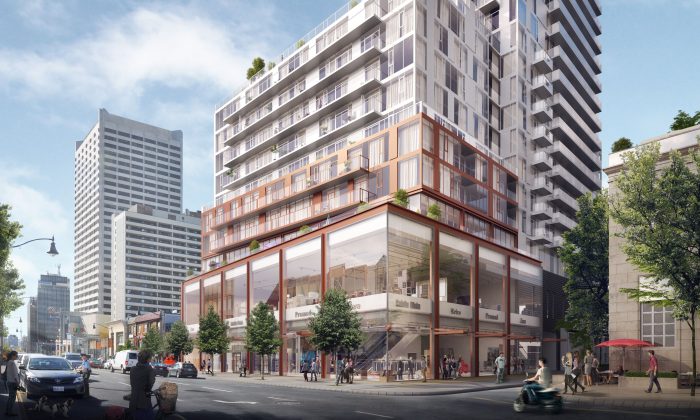 Lifetime Developments Is Clearly Building for the Future

For more than 30 years, Lifetime Developments has been at the forefront of the Toronto real estate scene, redefining some of the city’s hottest neighbourhoods and reimagining its emerging communities.

As an award-winning developer, Lifetime’s success is due to its selective locations, distinctive approach to architecture and design, and its ability to meet the needs of Toronto’s end user and investor markets.

“We have earned a reputation for our focused approach to delivering distinguished residential and mixed-use developments in great neighbourhoods,” Lifetime vice president Brian Brown told the Epoch Times in an interview, adding that the company has been the “driving force behind some of Canada’s most successful projects, and the transformation of some of the city’s most iconic neighbourhoods.”

Their list of successful projects includes the development of the ultra-luxurious Four Seasons Hotel and Private Residences Toronto in Yorkville, INDX Condos in the Financial District, The Bond Condominiums in the Entertainment District, BISHA Hotel and Residences in the downtown core, and the Liberty Market Lofts in Liberty Village.

While Lifetime has been one of Toronto’s most successful developers for more than a decade, 2015 was a particularly exciting year for the developer, as it included delivery of X2, a follow-up to the popular X condos in Yorkville/Bloor (in partnership with Great Gulf Homes), and the completion of The Yorkville, a dramatic 31-storey tower set in the heart of the chic and stylish neighbourhood that inspired its name.

Last year also saw Lifetime launch Whitehaus, a 29-storey contemporary high-rise condo on Yonge at Eglinton. Adjacent to both the Yonge subway line and the anticipated Eglinton Crosstown LRT, the iconic tower, designed by the internationally-celebrated firm of Diamond Schmitt Architects, boasts a white canvas-like exterior, which according to Brown, “will be punctuated by the colourful lives of its residents.”

Launched in the fall, the project was among 2015’s most successful projects, as Whitehaus sold 60 percent of the Cecconi Simone designed suites within weeks of the project’s opening.

“Smart layouts, contemporary designs, stunning architecture and an unparalleled location at Yonge and Eglinton contributed to the project’s success,” says Brown.  “But it was the support for the project from the brokerage community—particularly Chinese brokers, who have always been important to Lifetime’s success—who helped us meet our goals for Whitehaus so quickly.”

Looking ahead to 2016 and beyond, Lifetime plans to continue to identify, develop. and market new projects in great locations along Yonge Street, including plans for large mixed-use projects, at Mary Street, and on the former site of the World’s Biggest Bookstore at Yonge and Dundas.

“We clearly love to develop along Yonge, and our purchasers love it too,” says Brown, smiling.

The year ahead will also see the company continue its efforts, with its partners at Diamond Corp. and Context Development Inc, to redevelop a 60 acre site at Don Mills and Eglinton. Currently the headquarters for Celestica, Lifetime and its partners are planning to create a robust, master-planned community on the site, featuring a mix of residential housing, commercial developments (including the new headquarters for Celestica), community and recreational facilities, and new connections to the natural ravine system and parks which abound in the area.

According to Brown, “While we will be busy in the months ahead launching and planning some amazing new sites, our construction teams will be even busier.”

Lifetime has multiple projects currently under construction, which the company expects to complete this year, including The Code, a nine storey boutique condo building in Forest Hill with 106 suites and 10 townhomes; INDX a 54-storey condo at Bay and Adelaide in the Financial District; Karma, a 50-storey tower at Yonge and College; and the Bond, a 42-storey condo in the Entertainment District.

The year 2017 should bring with it the completion and occupancy of the Bisha Hotel and Residences, a 44-storey building on Blue Jays Way in the heart of the city’s Entertainment District that will serve as the flagship for a new private-label boutique hotel brand.

With new projects preparing to launch, construction continuing, and occupancies ahead, Brown and the team at Lifetime Developments are clearly building for the future.