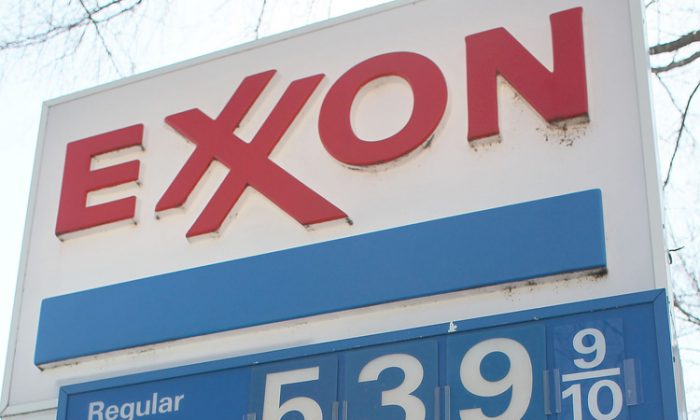 A sign shows gas prices over $5.00 a gallon for all three grades at an Exxon service station on March 13 in Washington, D.C. So far in 2012, U.S. car and light trucks sales improved over sales during the same period in 2011, but large car sales decreased by 87.3 percent and large SUVs by 7.8 percent. (Mark Wilson/Getty Images)
Business

Gasoline prices at the pump have been increasing by leaps and bounds, according to a historical trend analysis of weekly averages of the retail cost of U.S. regular gasoline on the Titi Tudorancea Bulletin website.

With gasoline prices moving up slowly, gasoline consumption slipped in the opposite direction after peaking between 2007 and 2008.

“It’s no secret (at least it shouldn’t be) that gasoline sales have plunged. … Every month for quite some time, the rolling average of petroleum and gasoline usage has been trending down,” suggested an April article on Mish’s Global Economic Trend Analysis, an investment advisory blog.

While gasoline prices were trending up or down at times, Americans have been tightening their belts and are taking to the road far less than a few years ago.

“By 2011, the average American was driving 6 percent fewer miles per year than in 2004,” according a recent report “Transportation and the New Generation” by the Frontier Group and U.S. PIRG Education Fund.

The analysis of driving trends wielded unexpected news. It is not the older generation that is curtailing their driving but the younger generation, those who are 16 to 34 years old. The eight years leading up to 2009 showed a decrease of 2,400 miles or 23.30 percent per individual.

“The trend away from steady growth in driving is likely to be long-lasting—even once the economy recovers,” suggested the report from the Frontier Group.

There are many reasons for that trend, among them is that there are many transportation alternatives. Then there are higher gas prices, which are cutting into people’s discretionary income. Also, parents nowadays may no longer have the funds to buy a car for their children due to unemployment, and good jobs are hard to come by.

To understand today’s dilemma, one only needs to look at the March unemployment data. The data indicates that the unemployment rate for people between 25 and 34 is 8.6 percent, which is 2.2 percent higher than for those aged 35 to 44 and 2.4 percent higher than for ages 45 to 55+, according to the Department of Numbers, a website that takes statistical data and puts it in a form that the layman can understand.

“The unemployment rate for people between the ages of 16 and 24 in this country is 18.4 percent, which is a 60-year high,” said Matthew Rothschild, editor and publisher of The Progressive magazine, in an October 2011 article on the PolitiFact website.

Other reasons for the change in driving habits is that baby boomers have started to retire and no longer need to drive to work. Driving has curtailed for a number of reasons. For example, many people prefer shopping online to driving to the malls.

Today’s driving laws make it more difficult for young people to get a driver’s license. They have to pay more for driver’s education because new laws require more behind-the-wheel training, adding hours to what had been considered sufficient training a few years ago.

Besides the above, the younger generation resorts to car pooling, takes alternative transportation, such as buses, trams, and metros, to places they want to visit, and maintains a lifestyle that does not require a lot of driving.

According to the Frontier Group report, “Many of America’s youth prefer to live places where they can easily walk, bike, and take public transportation.” These lifestyle changes are more prevalent among the younger generation than their elders.

Health of the U.S. Car Market

The question remains that if the younger generation curtails its driving habits or even lives at locations where no car is needed, what happens to car sales?

Also, with the current unhealthy U.S. unemployment situation, an economy that is still tottering along, uncertainty about the future prospects of a healthy U.S. market, and credit hard to come by, the automotive industry should also feel the pinch.

As of year to date 2012, U.S. car and light trucks sales improved over sales during the same period in 2011, but large car sales decreased by 87.3 percent and large SUVs by 7.8 percent, according to statistics collected by the Market Data Center of the Wall Street Journal.

The Automotive News Data Center indicates that for the first three months in 2012, U.S. car sales increased by 13 percent over the same period in 2011. But given the proposed corporate average fuel economy standards for new cars, the auto industry is up in arms, fearing reduced sales opportunities.

The National Automobile Dealers Association (NADA) claims that according to the Environmental Protection Agency (EPA) and the National Highway Traffic Safety Administration (NHTSA) the new requirements would add an average of $3,000 to the price of a car.

NADA suggests in an April 12 statement that lower income car buyers won’t be able to afford the cars. “Nearly 7 million lower income consumers, such as college students and working families, will not qualify for auto financing to cover the additional cost,” according to NADA’s statement.

However the statement doesn’t point out that the projections by NHTSA and EPA are forward-looking to the year 2025, with the assumption that gasoline prices remain at today’s level. Besides, NADA didn’t take into account average fuel savings, which would be an added bonus to the consumer and result in a net savings instead of an increased cost.

“Higher costs for this vehicle technology will add on an average of about $2,000 for consumers buying a new vehicle in 2025. However, these consumers will save on an average of $6,600 in fuel savings. That is about $4,400 net savings. And for this estimate we are assuming that the gasoline prices in 2025 will be approximately the same level as they are today,” said Margo Oge, director at the EPA, during a public hearing on Jan. 17.