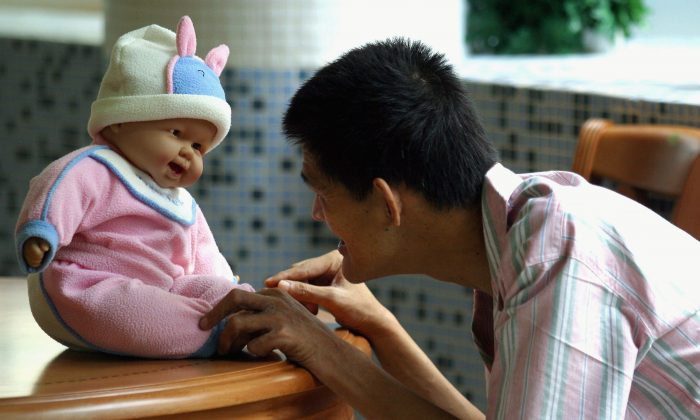 A man who suffers from senile dementia plays with a doll as a treatment to remind him of the old days at the Cihui Rehabilitation Center for the Aged in Guangzhou, Guangdong Province, China, on Sept. 2, 2005. (China Photos/Getty Images)
Trending

A lifelike baby doll prompted police in New Hampshire to smash a car window in a rescue attempt that turned out to be a false alarm.

WMUR-TV reports police in the town of Keene said that someone called them last month to report an infant left in a car at a shopping plaza on a hot day. Lt. Jason Short shattered the window with his baton. He tells the station he thought he was looking at a lifeless child, but noticed something was off when he began to breathe into the baby’s mouth.

The station reports the lifelike doll belongs to a Vermont woman who collects them as a way to cope with her son’s death. She says police told her they would pay for the broken window.

“I got there as soon as I could,” Short told ABC. “I don’t know how fast I was going, but it was quick.” What he saw “looked lifeless, looked dead,” Short recalled.

The doll was actually a “reborn doll,” which are dolls manufactured to look as lifelike as possible. Some “reborn dolls” can fetch as much as $2,000.

“It felt like a baby,” he said. “It looked like a baby. And – and everything about it was ‘baby,'” Short told the network.

Even though it was just a doll, it’s a reminder to keep children and pets out of hot vehicles during the summer months.

Heatkills.org, citing the U.S. Centers for Disease Control and Prevention, says that temperatures range between 80 and 100 degrees, the interior of the car can get to 130 to 172 degrees.

-Always check the back seats of your vehicle before your lock it and walk away.

-Keep a stuffed animal or other memento in your child’s car seat when it’s empty, and move it to the front seat as a visual reminder when your child is in the back seat.

-If someone else is driving your child, or your daily routine has been altered, always check to make sure your child has arrived safely.

-Experts have noted that a car’s temperature can rise 20 degrees Fahrenheit in under 10 minutes.

The U.S. National Highway Traffic Safety Administration, in an update, said that 10 children so far in 2019 have passed away inside hot cars.