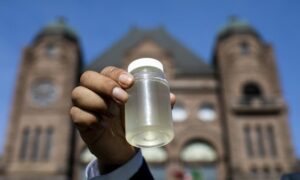 EDMONTON—They came to honour a father, a husband, a son and a friend. But Const. Daniel Woodall, Regimental Number 2829, was also recognized as a dedicated police officer who had only begun to tap his talents as protector of the abused and the bullied.

Woodall came into his own when he was assigned to the hate-crimes unit and his “tragic and senseless” death means a “life work cut short,” Edmonton police Chief Rod Knecht told mourners at the slain policeman’s funeral Wednesday.

“It was this last posting, more than any other, that brought out elements of his personality that made him such an effective police officer. He helped those that were abused or bullied and … those who needed assistance,” Knecht said.

“Dan invested time and effort in many, many Edmontonians. He served faithfully, modestly and proudly with an incredible depth of commitment.”

Woodall was shot and killed last week as he was trying to arrest a man he’d been investigating. Norman Raddatz was believed to be behind vicious anti-Semitic bullying that had led an Edmonton family to fear for its safety.

“Dan’s work with the hate-crimes unit speaks to the kind of city that we are building. We will continue Dan’s good work and build upon his exemplary leadership, reaching across communities to forge deep and lasting relationships with one another, human being to human being.

“We are truly grateful for the example that Dan has set for all of us.”

Woodall’s widow, Claire, and the couple’s two- and four-year-old sons, watched from the front rows in a cavernous convention centre as colleagues and friends paid tribute to the 35-year-old officer, who came to Edmonton in 2007 after starting his policing career with the Greater Manchester Police in England.

“My first thoughts were that he looked like a 12-year-old in uniform,” said friend and colleague Dave Ainsworth of the fresh-faced young man who walked into the police station in Manchester in 2002.

“He quickly offered to walk a beat with me where many wouldn’t and I quickly found out that this was Dan,” recalled Ainsworth, who stopped several times during his eulogy to compose himself.

“He was first to step up. He had my back and I had his. His biggest fear was letting you down. He had compassion when he needed to and strength when required.”

Ainsworth also remembered Woodall’s wicked sense of humour and how his friend laughed the loudest at his own jokes.

Michael Catlin, a New York Police Department officer who met Woodall at a policing conference in Calgary last year, said the two of them immediately hit it off. They liked to talk about everything from their tattoos to martial arts to snappy suits to their Jeeps.

Catlin said Woodall never pretended to be anybody but himself. “Dan was the purest form of himself. He stood a gentleman among men. He stood a cop among police.”

Knecht also acknowledged the strength and grace shown by Claire Woodall, who he said has herself become an inspiration. He promised her she would always have the support of the police force.

That composure wavered momentarily when Knecht presented the widow with her husband’s cap, belt and the flag that had draped his coffin.

The thousands of service men and women, who a short time earlier had marched shoulder to shoulder in a procession through sombre streets lined with onlookers, then stood as his coffin was carried away and offered one final salute.