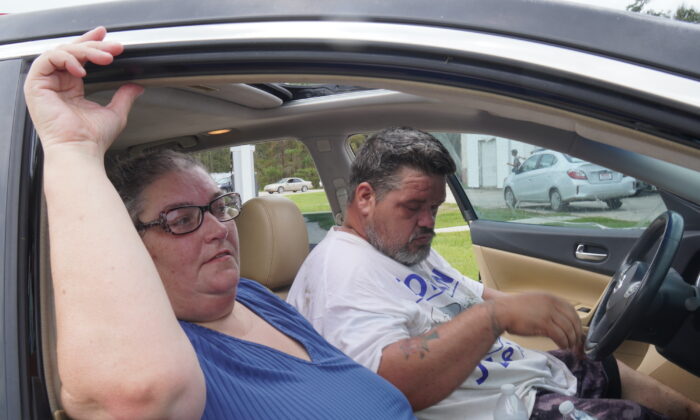 Clarence and Nyeki Bright endure the heat as they wait for gasoline at Big Boss Travel Plaza in Tickfaw, La., on Sept. 3, 2021. (Jackson Elliott/The Epoch Times)
US

Living without power after a hurricane sounds like a return to a simpler time, but the reality is more complex.

Outside, a cooler, which once held ice, sat smashed open. A few days ago, several people fighting over ice cubes broke the glass and stole the ice, gas station staff said.

“It wasn’t one person,” said the owner’s son, Nabeel Idres. “It was multiple people. We couldn’t really do anything. We’ve got bigger problems to deal with here.”

With no working refrigerator in a Louisiana summer, even something as ephemeral as frozen water becomes worth a fistfight. On Sept. 3, people waited in a long line of cars.

Big Boss is 40 miles inside Hurricane Ida’s 100-plus-mile-wide powerless area. Inside this dead zone, the more forceful east side of the hurricane hit like a machete.

Trees splintered like toothpicks and roofs ripped off. But the hurricane’s aftermath brought even more problems. Across the southern half of Louisiana, residents flipped on their generators only to face a growing gas shortage.

As gas shortages widened from New Orleans, people from the city and local communities began a desperate search for fuel. In the days after the hurricane, the metropolitan area’s nearly 1 million people drained every local gas station and started searching the countryside for more.

At Big Boss, a two-hour line of more than 30 cars waited for gas. In their cars, Louisianans endured 87 degree Fahrenheit heat as they waited for the gasoline to power their generators. With humidity factored in, it felt like 96 degrees.

In the car line, locals hoped there would still be gas when they arrived at the two working pumps. Occasionally, someone would try to cut in, before being stopped by store staff or police.

Despite the occasional act of desperation, most people worked together to help each other. The power will likely remain out for a long time.

“If we get the lights back on within a month, I will be very, very happy,” said local Clarence Bright. “The power people are doing what they can.”

“We all try to pull together until it gets dark,” he said. “That’s when all the thieving starts.”

Despite the high demand, gas costs no more than usual, and it’s not rationed.

The line moved with frightening slowness. It stopped entirely for minutes at a time as people filled jerry cans with gas.

Many people turned off their cars during the wait, enduring the heat.

Living without the electric grid presents challenges, local Rob Fontenot said while waiting in line. He owns a generator and keeps four days of fuel on hand, but some of his neighbors don’t have one.

“We were blessed,” he said. “We don’t lose food because we keep our refrigerator and freezer charged up.”

Generators cost far more than grid power. Fontenot estimates that a week of fueling the generator costs more than his monthly electric bill.

“Air conditioning, even if it’s just one room, is a blessing,” he said. “Too much heat is life and death for some people.”

Finding gasoline after the hurricane can also be a challenge, Fontenot said. When people find a gas station with fuel left, they post the location on social media.

Since the hurricane, there’s been little to do. Fontenot, a commercial driver’s license instructor, hopes to return to work next week.

His wife, Maureen, hasn’t worked at her job with the local government because of power outages. In the meantime, she and other Louisianans will have a long and uncomfortable “vacation.”

Bright said he spends his time barbecuing so he can preserve meat. He picks up trees smashed by the hurricane for fuel.

“You eat the barbecue,” he said. “Basically, you’ve gotta do something with the meat, and it’s better than throwing it away.”

Besides gasoline, the store’s best-selling item is alcohol, Idres said. Several customers carry cases of beer through the parking lot.

Their drinks won’t be cold for long, but they can at least take the edge off the heat.