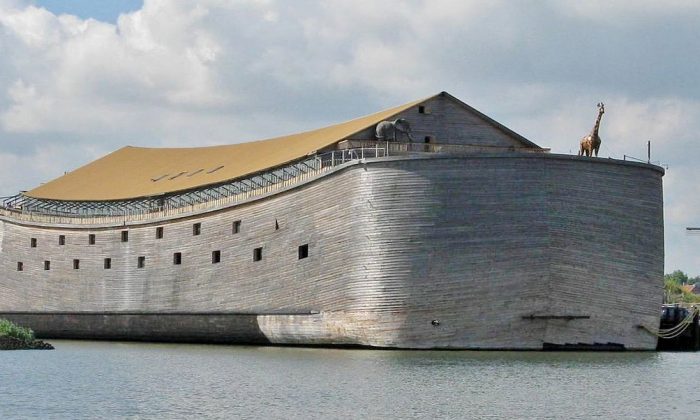 Life-Sized Replica of Noah’s Ark Will Sail to Israel, Says Man Who Built It

The ark, he said, was built with seven people over four years. “I wanted children to come here and feel the texture of the wood, see the nails and see that what is written in the book is true,” he said.

In the JTA interview, he explained that he got the idea to build the ark after reading an account of Noah’s Ark to his children.  In the Biblical story, Noah was called to create a vessel big enough to save all animals and humanity during the “Great Flood.”

“I wondered whether someone, Disney perhaps, had already built a replica of the ark,” he said. “And then I said out loud that if none had, I would.”

His wife, a police officer, was incredulous that he could build it. “She told the kids that after I finish building my ark, we can all go on vacation to the moon,” he told JTA.

About 13 years later, he built a smaller ark that Dutch media called “Johan’s Ark,” but it was only about 230 feet long and 33 feet wide. “When everyone asked me: Why is it only half the size of the one in the Bible? So I sold the smaller one and built a life-size one, too,” he said.

Huibers said he had plans to sail the ark to Brazil, but they did not materialize. He said the cost of sailing the vessel 5,000 miles across the Atlantic would cost nearly $2 million, according to the Daily Mail.

The ark, however, isn’t designed to save the life of Huibers’ family, he said.  “Maybe it will, who knows, but my survival is not its purpose,” Huibers added. “It’s meant to educate, a reminder that our world is changing.”

Huibers said that in case of catastrophe, he keeps another boat that can hold 100 people.

Ark Of Noah Dimensions from Ark of Noah Foundation on Vimeo.

“The Ark of Noah replica was built by Johan Huibers from 2008 – 2013. The Ark is in the Netherlands and has attracted hundreds of thousands of visitors,” according to the ArkofNoah.org website.

“The vessel itself is an immense life-sized exhibit with multiple floors. Visitors will experience Bible-based stories and exhibitions, attractions, a movie theater and more. The Ark of Noah Foundation will bring the Ark of Noah to Brazil with the help of worldwide supporters,” it stated.

According to Bored Panda: “At the moment Huibers is seeking donations from good Samaritans to help reach his goal of taking the vessel to Israel. As the ship has no motor, Huibers will need to rent tugboats in order to sail it, requiring approximately $1.3 million to complete the voyage.”

More details and how to donate can be found on the Ark of Noah website.