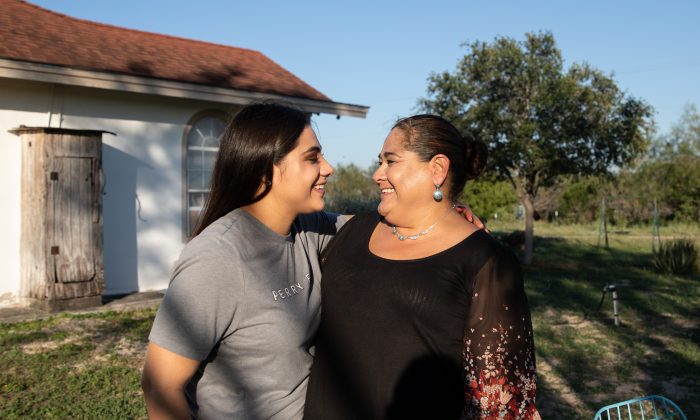 Martina Arredondo shares a moment with her daughter at her home in Rio Grande City, Texas, on Nov. 6, 2018. (Samira Bouaou/The Epoch Times)
US News

RIO GRANDE CITY, Texas—Martina Arredondo sleeps with a gun. So far, she has killed a few rattlesnakes with it. And, once, she fired a warning shot into the air when she spotted intruders on her property in the middle of the night—which, in a twist, turned out to be Border Patrol agents looking for illegal aliens.

“Am I going to be capable of killing somebody? I hope not. Because really and truly I wouldn’t like that,” Arredondo said at her home on Nov. 6, 2018. “But if I have to defend my kids, my life, my kids’ lives, my granddaughter’s life, I won’t hesitate.”

Arredondo lives on a two-acre property on the outskirts of Rio Grande City, Texas. It’s nearly three miles from the Rio Grande, which doubles as the U.S.–Mexico border. From the Roma Bluffs, which overlook the Rio Grande, on most evenings at sunset, it’s possible to see illegal aliens crossing the river into the United States.

Some of them make their way to Arredondo’s property. Several years ago, her husband discovered a camp just beyond their property that was operating as a staging point, or stash house, for illegal aliens.

When her husband returned from working on the oil fields, Arredondo told him about the increase in strange cars driving past their house and onto an empty ranch.

“He found a camp not far away from here,” she said. “There was a lot of jugs, there were clothes, there were backpacks. That is not a hunting camp.”

Two days later, Border Patrol agents confirmed they also had found the camp, which was inhabited by illegal aliens.

A month later, Arredondo woke to a helicopter flying low over her house. About 30 law enforcement vehicles were swarmed around a trailer that was located across the road.

“Sixty illegal aliens in that trailer home,” she said, adding that they were all arrested. “At what time did they cross over? Did they cross through my property? Where do they come from? I don’t know.

“Am I happy? Am I glad? It breaks my heart because I see their poverty and I feel what they feel because I lived it once. But it’s not the way to come into our country.”

Forty percent of the almost 400,000 illegal border-crossers apprehended by Border Patrol in fiscal 2018 crossed in the Rio Grande Valley in Texas.

“At that point, who do you call?” she said. “So we stopped walking so we won’t see any of the illegal activities or anything like that.”

She has also stopped going fishing.

“One time, my husband and I were fishing by the riverbank. We found three illegal aliens, three young men. They were so excited, and they told us, ‘We’re already in Houston, right?’” Arredondo said.

She said that after her husband told them Houston was a five- to six-hour drive away, or a month-long walk, the men looked like they were about to cry.

“My husband felt so bad for these people. He said, ‘I’m just going to give you a ride—and I’m not supposed to—but I will take you to the church and let them help you,’” Arredondo said. “We did the wrong thing, but looking at these men, they were hungry, they wanted water. First and last time that we helped somebody.”

It is illegal to transport or harbor illegal aliens, according to the Immigration and Nationality Act.

Ten years ago, the Arredondos slept with their windows open. Now, they have air conditioner window units and surveillance cameras installed.

‘He’s Putting His Foot Down’

Arredondo and one of her sisters were born in the United States, but her other six siblings were born in Mexico, which makes for some heated family arguments.

“I agree with President Trump over the border wall, with him sending all these troops. I back him up 100 percent. Why? Because we are being secured. And it angers me when people say that he’s doing a stupid thing, just spending money that is not supposed to be spent.”

Trump and Democratic leadership are at a standstill in negotiations after Speaker of the House Nancy Pelosi (D-Calif.) called the president’s latest compromise a “non-starter.”

On Jan. 19, Trump outlined a new deal that asked for $5.7 billion in border wall funding, along with several billion for more Border Patrol agents, enhanced drug-screening capabilities at ports of entry, and more immigration judges.

He also offered three years of legislative relief for the approximately 700,000 recipients of the Deferred Action for Childhood Arrivals (DACA), as well as a three-year extension for those with Temporary Protected Status.

In Pelosi’s statement rejecting the president’s offer, she outlined the same priorities as Trump for ports-of-entry drug screening, more Border Patrol agents, and extra immigration judges. It’s the $5.7 billion for the border wall that is the sticking point. Pelosi has called the wall expensive and ineffective, while also saying, “a wall is an immorality between countries; it’s an old way of thinking.”

However, Border Patrol agents have called for more fencing along the border, saying it reduces illegal crossings, helps them with safety, and buys them time to respond to incursions.

Both the House and the Senate are expected to pass border security legislation this week; however, it’s unlikely the House legislation will contain any border wall funding.

Trump has said he is considering declaring a national emergency, which would enable him to secure wall funding through the Department of Defense; however, this move would likely be swiftly blocked by judges on the Ninth Circuit.

Arredondo, who is fiercely protective of her three daughters and 4-year-old granddaughter, gets upset when she hears DACA recipients being called “Dreamers.”

“My children are dreamers. I’m a dreamer. Call me a racist. Call me whatever. I don’t care. I have two kids in college. It comes out of my pocket. Dreamer. My kids are dreamers. All American kid is a dreamer,” she said.

DACA was set up through an executive order issued by former President Barack Obama in 2012 for minors who were brought into the country illegally by their parents. It gives recipients, some of whom are now older than 37, protection from deportation, work authorization, and access to other benefits, over a two-year, renewable period.

Trump’s attempt to phase out DACA was blocked by a judge and will be decided upon by the Supreme Court, possibly during the summer.

“How about my dreamers? Of course I dream of my kids having a free ride at college. Who doesn’t? Do they consider us dreamers? No. Why? Because we are U.S. citizens,” Arredondo said. “I wish President Trump helps out our American dreamers, our children.”

She said she suspects the food stamp system is also being ripped off.

“You go to the stores, especially when it’s food stamps day, and you can see these people with a lot of groceries, two carts. And then you wait. You can be outside in the parking lot and wait for those people that you saw in the line. You can see them putting the groceries in their Mexican car [and] heading back to Mexico with those groceries,” she said.

“You can follow them all the way to Mexico and they have their little stores and they sell those products they bought with our food stamps. They sell them over there.”

In September 2018, the Trump administration issued a proposal to promote self-sufficiency and crack down on federal assistance going to noncitizens, including by disallowing green cards to those who use public assistance.

Nearly 63 percent of noncitizen households access welfare programs, compared with 35 percent of native households, according to a study by Center for Immigration Study published in December 2018.

Illegal immigrants are given more than $5.8 billion per year in federal welfare assistance, according to a study by Federation for American Immigration Reform. The group estimates illegal aliens cost taxpayers $115 billion net, per year.