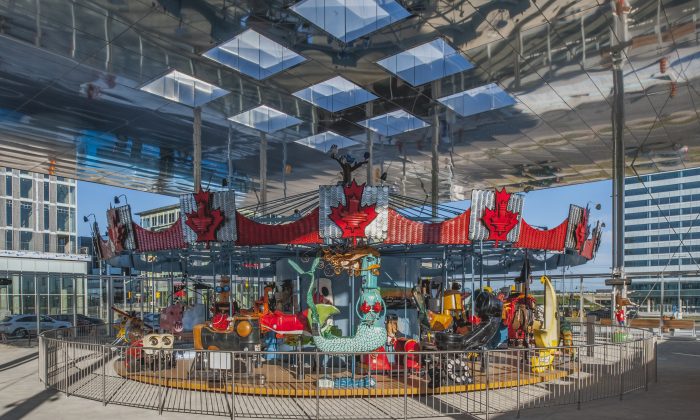 Life Is a Carnival

Just ask the scores of smiling people who’ve already taken a spin on the new Pride of Canada Carousel that’s destined to become the focal point and jewel of Downtown Markham.

A gift from the Remington Group—the company developing the 243-acre mixed-use site—the giant merry-go-round features 44 rideable sculptures ranging from mermaids, to moons to old skates, all of them made from reclaimed “odds and ends” found and assembled by Canadian-born artist Patrick Amiot.

It’s whimsical, colourful, surrounded by music and has been filling up with smiling kids, moms, dads, grandparents—everyone, really—since it opened July 1.

“It was just so much fun,” said Emily Saraga, six, with a huge grin as she skipped off the ride. “Not too fast, not too slow … and the music was beautiful.”

She shared the ride with her mom, Alyson Gampel, who says she can see the carousel becoming “very, very” popular.

“It’s something that families will want to see,” she said. “It could be a meeting place.”

Sisters Allie and Zoe Levesque, four and six respectively, enjoyed their ride in a “piggy” and a rooster and said they want to come back as soon as they can to try out the other characters.

The girls’ grandmother, Linda Wightman, said the ride is a worth a trip just to see the quirky and eclectic figures.

“I can tell the artist worked hard at this,” she said. “I see shovels that are used for ears and there are a lot of old wonderful licence plates scattered on different pieces … I guess a lot of it’s just junk, but it works.”

It’s indeed totally different, and calling it “junk” does not offend the artist in the least.

Amiot says objects destined for the dump are the “essence” of his work and that nothing is too broken, too torn, or too rusted to be overlooked.

From items he already had and pieces he discovered on a cross-Canada road trip made specifically for the carousel, the ride includes—among a myriad of other items—a satellite dish, car fenders, the front end of a small Renault vehicle, gas tanks, lids, parts of a Volkswagen, and even pieces of a Harley-Davidson motorcycle.

With a bit of welding and a lot of imagination his “found material” is used to make up some of the nation’s most celebrated treasures such as a massive beaver, a moose, a duck, an ice skate, and even a Mountie—hence the name “Pride of Canada.”

Painted by his wife, Brigitte Laurent, assembled by Daniel Horenberger of Brass Ring Carousel Company (one of the world’s top ride restorers) and housed in a beautiful glass pavilion designed by architect Sheldon Levitt of Quadrangle Architects, the carousel will be open year round.

The ride, located at the intersection of Birchmount Rd. and Enterprise Dr. was born out of the Remington Group’s desire to create an anchor for the firm’s ambitious mixed use development now going up between Warden Ave., Kennedy Rd., Highway 7, and Highway 407. There was also a desire to secure a signature piece for the Remington Art Collection and Remington Contemporary Art Gallery—the group’s ambitious $25 million public art initiative in Downtown Markham.

Chris Bratty, president of Land Development and Acquisitions for the Remington Group, said he was looking for a “cultural anchor and gathering place” that would give a sense of place and community to a project that would eventually include 2 million sq. ft. of retail, 3.4 million sq. ft. of office space, 10,000 luxury town manors and condominiums, and 72 acres of green space when completed.

The task was undertaken by the collection’s curator, Shelley M. Shier of Broadway Bound Entertainment, who came up with the fine art carousel concept in what principals at Remington are calling a flash of brilliance.

Once the team was assembled, the hard work began.

Amiot’s objects—from gas cans to oil drums, knives and spoons and old baseball gloves from across the country—took shape at his studio in Sebastopol, California, but had to be placed on a family friendly, rideable handmade carousel to exacting standards.

Once outfitted with a hybrid solar-power enabled motor, fully assembled and tested, the carousel was taken apart and began its journey to Canada and its new home that includes a nearby reflecting pond and skating rink with adjacent splash pad.

“We have something special here,” Bratty told an audience at a preview of the ride before its official opening. “It’s a place to meet one another, make friends, and be a part of the community. I’m sure a lot of memories will be made at this spot.”

Speaking at the same event, Markham mayor Frank Scarpitti called the carousel the “crowning jewel” of an already wonderful mixed-use development. “These are very exciting days … memorable days,” he said. “We’re completing our goal of creating a real city centre and it’s a wonderful time to be living here.”

Bratty says the Downtown Markham development will not be a simple bedroom community for Toronto but a vibrant centre of its own and a quick visit proves he’s true to his word.

The tree-lined streets are filled with pedestrians, the traffic is calm, the architecture and size of the buildings does not overwhelm and the amenities, including shops, restaurants and physicians, are everywhere.

It’s been called the “newest downtown” in Canada’s largest metropolis and is situated in an area that is quickly getting a worldwide reputation as this country’s high tech capital.

The surrounding community is interconnected by various platforms of public transportation with York Region soon getting its own subway stops.

Bustling with customers who already live and work there, due to businesses like Aviva Canada, Honeywell, and Motorola who call the neighbourhood home, Downtown Markham’s first phase of retail is thriving.

The city of Markham has already identified two sites for elementary schools within the development and is already home to Bill Crothers Secondary School.

The community will soon be home to York University’s newest campus initially serving 4,000 students expanding to a full service campus with an enrolment of 20,000.

And while Downtown Markham grows, Amiot says he hopes its residents enjoy the carousel as much as he did making it.

He says everything he discovers or simply picks up off the road has a history and is special.

“The whole purpose of my work is to glorify these objects because they have their own spirit,” he says. “When a hubcap has travelled on a truck for a million miles, and has seen the prairies in the winter and the hot summer asphalt, when it’s done travelling with that truck and finds itself in the scrap yard and I find it … I kind of like to use that.”

He says everything he discovers or simply picks up off the road has a history and is special.

“I like to think all these things have lived incredible lives,” he says. “If they could talk to you, they could tell amazing stories.”

The Pride of Canada Carousel will be open seven days a week from 10 a.m. to 8 p.m. with an admission of $2 per rider (for maintenance).