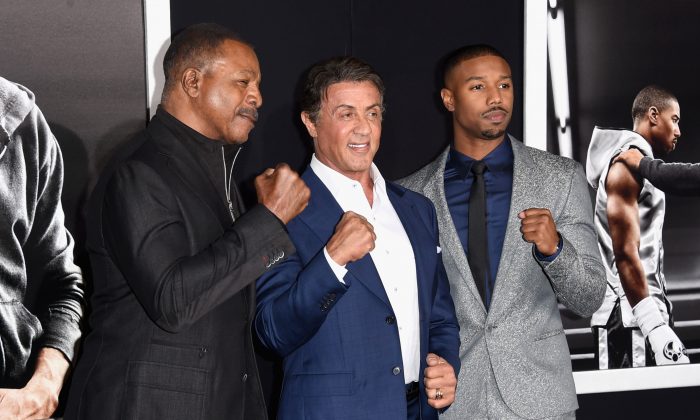 LOS ANGELES—”Fruitvale Station” writer-director Ryan Coogler is sending a love letter to his father in the form of the latest “Rocky” film.

“Creed” was inspired by his dad, who showed him the “Rocky” movies over and over when he was growing up.

And as Coogler told a story about a father-son relationship between Rocky Balboa (Sylvester Stallone, of course) and Adonis Creed (“Fruitvale” star Michael B. Jordan), the young filmmaker and his cast found themselves being coached off-screen by Rocky himself.

“There was a lot of art imitating life,” said Coogler, 29. “The same way Rocky has this advice for Adonis, [Stallone] would kind of treat us the same way.”

“Creed” tells the story of Adonis Creed, the illegitimate son of Rocky’s late opponent-turned-friend Apollo Creed. Adonis never met his father, but he wants to be a professional fighter, so he goes to Philadelphia to seek Rocky’s help. Though initially reluctant, the old champ agrees to coach the young boxer, and they form a filial bond that grows in tandem with the stakes they face.

When Coogler first pitched Stallone the idea of another “Rocky” film, the Hollywood veteran wasn’t too gung-ho. The young filmmaker was fresh out of grad school, and Stallone had hung up Rocky’s gloves years earlier in 2006’s “Rocky Balboa.”

This was before Coogler’s first feature, “Fruitvale Station,” won honours at the Sundance and Cannes film festivals and heralded him and Jordan as talents to watch.

The role of Adonis Creed would require an actor as dedicated to his training as Rocky was for his first big fight. On this, Stallone and Coogler agreed.

“He’s a fantastic actor,” Stallone said of his 28-year-old co-star. “He’s so dedicated.”

Jordan spent a year physically preparing for the role. When he met Stallone, he “was like an uncle,” Jordan said, “somebody I could sit down and talk shop with.”

If Stallone recognized the young men’s work ethic, Coogler and Jordan were awed by his. They saw what Coogler described as “a 68-year-old dude with nothing to prove” who filled the margins of his script with handwritten notes and reflected on his scenes hours after they’d wrapped.

Such dedication inspired the younger men to work harder.

“I don’t ever want to be in a position where I can’t answer his questions, so I’ve got to do the work myself,” said Coogler, who was inspired by Stallone’s commitment to the craft. Coogler directs the Oscar-nominated actor to one of the most affecting performances of his career.

Still, Stallone surprised his director and co-star when he coached, er, coaxed an unexpected performance from Jordan in a particularly emotional scene. Coogler realized Jordan was suddenly crying off camera, and reshoots were needed to get the emotions on film.

“I don’t know, man. He got me. That’s a testament to Sly and this guy,” he said, pointing to Coogler.

“It’s the same way Rocky saw a little of himself in Adonis” Jordan said of the men, “that persistence and everything.”

Coogler’s dad, meanwhile, has been posting endlessly about his son’s latest film on Facebook.

“I need one of those!” Jordan said.

Coogler expected to tell a story about his relationship with his dad through Rocky and Adonis, but he got experience that dynamic with Stallone as well.

“What I was interested in with this movie was these two guys in this accelerated father-son relationship,” Coogler said. “And that’s what I see when looking at the movie: just fathers and sons.”