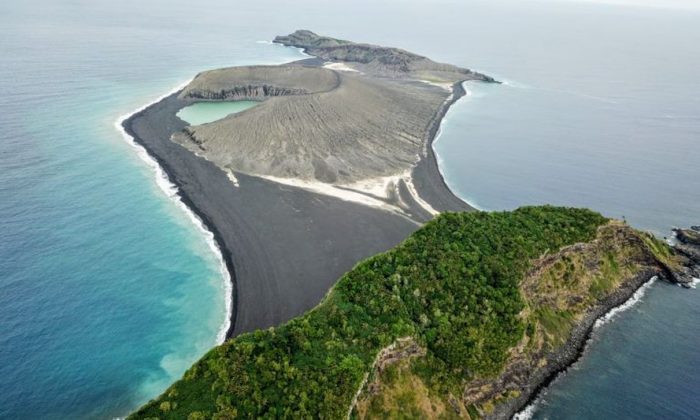 New vegetation and a mysterious, sticky mud were found on one of the world’s newest islands, located in the Pacific Ocean.

NASA said it is the first island of its kind that has formed since satellites began taking pictures of the Earth on a regular basis.

Scientists first predicted the island would exist for just a few months. But in 2017, NASA said the island survived “against all odds” and may last from six to 30 years.

“We were all like giddy school children,” said Slayback after visiting the island.

“Most of it is this black gravel, I won’t call it sand–pea sized gravel–and we’re mostly wearing sandals so it’s pretty painful because it gets under your foot. Immediately I kind of noticed it wasn’t quite as flat as it seems from satellite.”

He added: “It’s pretty flat, but there’s still some gradients and the gravels have formed some cool patterns from the wave action. And then there’s clay washing out of the cone. In the satellite images, you see this light-colored material.”

The island is mostly “mud” and “light-colored clay mud,” he added.

“So even though we’d seen it we didn’t really know what it was, and I’m still a little baffled of where it’s coming from. Because it’s not ash,” Slayback stated.

The scientists were also able to get close photos of the vegetation that is starting to take hold.

“A barn owl made a surprise appearance (they occur worldwide; the sighting was not, it turns out, particularly remarkable), likely living on the heavily vegetated older islands, as well as hundreds of nesting sooty terns that had taken shelter in the deep gullies etched into the cliffs surrounding the crater lake,” NASA said.

NASA said the vegetation was likely fertilized via bird droppings, and the animals were living on nearby islands.

“It really surprised me how valuable it was to be there in person for some of this. It just really makes it obvious to you what is going on with the landscape,” he said.

Slayback noted that the island appears to be eroding faster than previously thought because of rainfall.

“The island is eroding by rainfall much more quickly than I’d imagined. We were focused on the erosion on the south coast where the waves are crashing down, which is going on. It’s just that the whole island is going down, too. It’s another aspect that’s made very clear when you’re standing in front of these huge erosion gullies. Okay, this wasn’t here three years ago, and now it’s two meters deep,” he said.