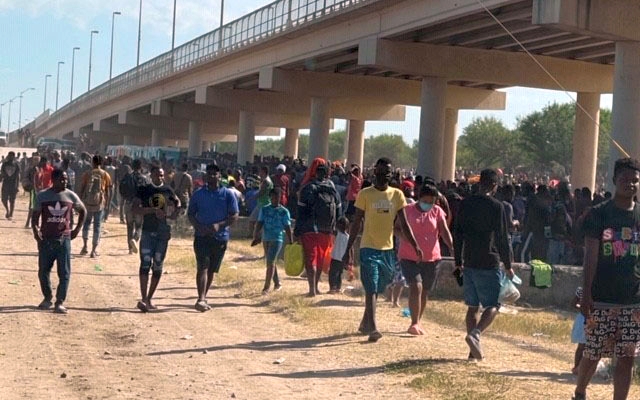 Life Along the Border Collapses

Take all of the imagery you have seen of the more than 14,000 Haitian migrants camped under an international bridge in the small Texas border town of Del Rio and add the complications of disease, public excrement, unbearable heat, and heightened frustrations. It has led to violence that has injured Border Patrol officers.

Now, close your eyes and imagine it is 100 times worse.

Because that’s what it is, said Texas Rep. Tony Gonzales, the freshman Republican who represents 42 percent of the border. The overwhelmed city of Del Rio had been in a rapidly deteriorating crisis situation when illegal immigrants first began surging into the community in January, but Gonzales now says the situation here is a “Category 5” and that the environment is unlike anything he has ever seen before.

“I arrived here today to pure chaos,” he said. “I’ve never seen it in this environment. There literally is no border left.”

“There’s no doubt there’s COVID here, there’s measles, tuberculosis, all kinds of diseases,” he said. “You’ve got kids running around in nothing but diapers. A handful of port-a-potties—my God, the stench is terrible. This is not good for the migrants. It is not good for the residents. It’s not good for wherever our government is sending them in the interior of the country.”

Despite the Department of Homeland Security insisting repeatedly that the Haitians would be deported, as of Tuesday, it had only removed 1,000 of the estimated 15,000 under the bridge. Multiple news organizations including CNN reported that buses have been escorting them to a nonprofit organization in town where they purchase bus or plane tickets. They are then moved to a gas station where buses pick them up and take them to other parts of the country.

The Washington Post reported that those released to parts unknown in the interior of the country number in the thousands.

“My takeaway after I walked through it all, I look over at the sector chief, and I go, ‘Man, I just feel sad.’ He goes, ‘I know. Everyone just feels beaten here,’” Gonzales said.

Del Rio residents have seen their lives turned upside down. The international bridge—a lifeline bringing tens of millions of dollars to the local economy— has been closed. If you’re a small-business owner and your business has somehow survived COVID-19, something like this could easily wipe you out.

Everybody has been sucked into this chaos.

“The worst thing is that we are not even talking about the other places where this is happening,” Gonzales said. “Today, we’re talking about Del Rio, but tomorrow, it’ll be Laredo or Brownsville or Eagle Pass or El Paso. This problem is not going away.”

Gonzales said he asked the chief of Border Patrol, Raul Ortiz, at a Homeland Security Committee hearing about its surge of agents to Del Rio.

“Those agents are coming from somewhere,” he said. “And my worry is other sectors are going to be weakened, thus creating a national security crisis, putting us at risk in other sectors, because everyone is focusing on Del Rio.”

Ortiz agreed. He also confirmed that reports were true that migrants had assaulted Border Patrol agents—five of them, to be exact.

Which is what makes the other part of this crisis political: Until a photo of a Border Patrol agent on horseback herding migrants back over the Rio Grande to Mexico was circulated on Twitter, Democrats, journalists, and the White House had almost completely ignored or downplayed the 15,000 people who had been living in squalor under the bridge.

Blue-check Twitter cried foul, claiming that the agent’s long reins were whips and absurdly likening the image to that of a white overseer whipping a slave. Suddenly, not only did press secretary Jen Psaki and the vice president notice, but they along with House Speaker Nancy Pelosi and the White House press corps fabricated a story about Del Rio—not about the appalling migrant crisis, but about how racist the Border Patrol is.

That story has been debunked, and to date, there are no reports that any migrant was ever “whipped” by agents.

It irks Gonzales that Border Patrol agents, who risk their lives and are coming under immense pressure right now, are having their actions and motives unfairly impugned.

“They see their jobs as patriotic,” the former Navy cryptologist said. “They know they are both protecting their community as well as their country.”

The Biden administration and Washington Democrats’ blind eye to this crisis have already had an impact politically. Hints of the future may have cropped up in last year’s election, when majority-Hispanic areas rejected the Biden campaign’s rhetoric that former President Donald Trump’s handling of the border was racist.

Texans pummeled President Joe Biden in several border counties, with large numbers of Hispanic voters going for Trump. That shift away from Democrats may grow given the handling of the border. Already this summer, Republicans unexpectedly won two big mayoral elections in border towns that are overwhelmingly Hispanic and historically Democratic.

And it isn’t just South Texas Hispanics who are running away from Biden and by default from the Democrats. It is all Texas Hispanics. Last week, a Dallas Morning News/University of Texas–Tyler poll showed that Biden’s approval rating with Hispanics in Texas is 19 points underwater, with only 35 percent approving of the job he is doing and a whopping 54 percent disapproving. There may be a realignment in the works.

In short, while white liberals in Washington think that using words like “Latinx” matters to the Hispanic community or connects them with its values, they are ignoring a crisis that deeply affects middle-class Hispanic families. They justifiably worry about their safety and their ability to pursue prosperity. The Democrats’ oblivious lack of concern for their real-world concerns is already backfiring.

Maybe if one of them, any of them, spent a few days living in a border town, the party would understand just how dire and dangerous life there has become.