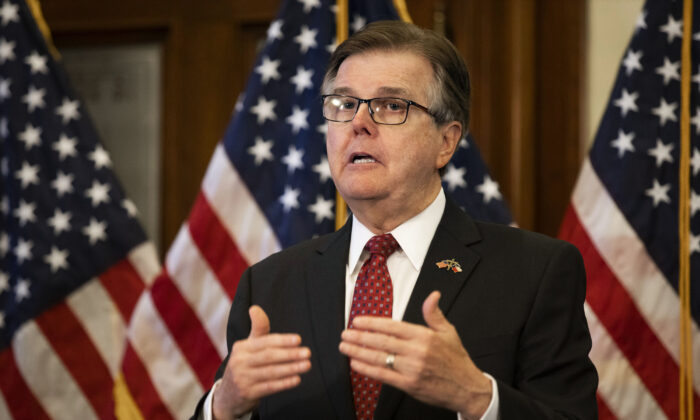 Lt. Gov. Dan Patrick of Texas wants his state to have its own version of the Florida legislation restraining schools from teaching gender and sexual identity in elementary schools. (Lynda M. Gonzalez/Getty Images)
Education & Family News

Patrick made his comments during a 15-minute phone interview at Dallas area radio station 660 AM “The Answer” on April 6.

He also described the “radical left ideology” as the “Marxist, socialist agenda to disrupt the family.”

In a series of communications in 2022, Patrick has made known his concerns about primary school education, higher education, and abortion.

Previously, Patrick has advocated the revocation of tenure for professors hired by the Texas university system; he has vowed to review books in public school libraries promoting transgender identity; he has affirmed the so-called “Heartbeat Bill” that restricts abortions after about six weeks, and he has now framed the gender issue in early primary school education in religious terms.

On April 4, the lieutenant governor, who’s up for reelection in November, released a campaign email after the Walt Disney Company had objected to the recent Florida legislation restraining schools from teaching young children about sexual orientation or gender identity.

Disney said its goal was to see the Florida law repealed or defeated.

Patrick not only defended the Florida law’s implementation but said he wants to see it “enacted in Texas.”

“I will make this law a top priority in the next session,” Patrick wrote. “This issue will be addressed in our interim Education Committee Hearings under Parental Rights.”

“Our goal as a company is for this law to be repealed by the legislature or struck down in courts, and we remain committed to supporting the national and state organizations working to achieve that,” the statement read.

“We are dedicated to standing up for the rights and safety of LGBTQ+ members of the Disney family, as well as the LGBTQ+ community in Florida and across the country.”

“This crazy ‘woke’ radical agenda is pushed by a few, but rejected by almost everyone in America, across all political spectrums,” he wrote.

“What can we do? Until they change their corporate philosophy, stop spending money with them. Cut off the Disney Channel. Cancel your trip or cruise, if one is planned.”

After being roundly criticized in some of the North Texas Press on April 5 and his email being characterized as a “Tirade against Disney,” Patrick took to the airwaves the next day.

“Can’t we let kids be kids, especially in kindergarten and first and second grade?” he said.

“We have the left who wants to teach, ‘If you’re a girl, you can be a boy,’ or vice versa. … That is not what parents want their children taught at that age, and some at any age—there’s no need for it, kids don’t understand it and parents don’t want it.”

However, his strongest statements were for the “left.”

“The radical left is pushing this ideology into our system, which is the Marxist, socialist agenda to disrupt the family unit,” Patrick said.

His campaign isn’t “Don’t Say Gay in Texas,” and no one should be bullied because of their orientation, he said.

“If someone chooses to be gay, that’s their lifestyle; just don’t try to turn society upside down about it,” Patrick said.

“LGBTQ+ has to understand that other people have rights, too. Parents have rights to say, ‘I don’t want my first and second graders to learn about being gay or lesbian or that they can change their sex.’”

“This is what this battle is about. This is the heart of it.”