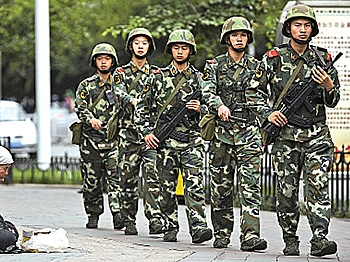 Chinese general Liu Yazhou lambasts the political system of China and predicts a political transformation toward democracy within the next ten years. (AFP/Getty Images)
China

Zhang Haishan
View profile
Follow
biggersmaller
Print
A prominent Chinese military commander has lambasted the Chinese political system in a recent interview and predicted a political transformation toward democracy within the next ten years.

Lieutenant General Liu Yazhou is the Political Commissar of the People’s Liberation Army (PLA) University for National Defense. He is also the son-in-law of former Chinese President, Li Xiannian. His public statements make him the first senior active-duty military officer to publicly criticize the Chinese Communist Party’s (CCP’s) policies without backlash from the regime.

In a recent interview with Hong Kong’s Phoenix Weekly, Liu said, “A system that does not allow its citizens to breathe freely, nor to maximally unleash their creativity, nor puts those who can best represent the people in leadership positions, is doomed.”

He further pointed out that the former Soviet Union also used to stress [social] stability above all else and regarded it as the ultimate goal.

“Stressing stability as a principle of overriding importance, and moneymaking as the only way to settle everything, will only lead to contradictions being aggravated, and everything will come against you.”

Liu also predicted that a political transformation from authoritarianism to democracy will inevitably take place within ten years.

Expressing reprehension for the “money diplomacy” and “economic powerhouse” concepts embraced by the CCP, Liu said “having more money does not mean having more soft power.”

He also criticized the money worship that defines contemporary mainstream Chinese society, arguing that it has damaged China’s international image.

Liu’s statements were published in the latest Phoenix Weekly issue, in an article entitled “On the West.” An editorial statement said that the content was compiled from the interview with Liu and published without Liu’s final review or approval.

Liu’s out-of-line remarks have spread quickly across the Internet and have also drawn attention from outside China. Some have conjectured that his comments are a reflection of a factional struggle within the CCP prior to its 18th party congress in late 2012.

The 57 year-old military commander is also a member of the Central Commission for Disciplinary Inspection, a secretive, powerful internal CCP body that investigates corruption and violations of inter-Party norms. He is the first senior active-duty military officer since 1989 to make outspoken public remarks in support of Chinese political reform and western political systems without being punished. His remarks have not only shaken political circles in China, but have also drawn the attention of U.S. intelligence agencies and the U.S. military.

Liu Yazhou was born into a military family. His father, Liu Jiande, was Deputy Political Commissar of the Logistics Department in the Lanzhou Military Region, Gansu Province. Liu’s father arranged for him to join the army after Liu graduated from middle school, and at the age 20 he was admitted—without exams—to the Department of Foreign Languages at Wuhan University. In college Liu showed literary talent and became a writer. It only took him 10 years from being a writer to becoming a general.

In his writings, Liu has touched on a variety of issues, from military strategy and diplomacy, to peasants and Taiwan. He has received considerable acknowledgment in the army for his comments and views.

In his book, China’s Grand Strategy for the Next Twenty Years, Liu discusses the Taiwan issue and proposes the “One Country, Two Systems” concept. He believes Taiwan should be integrated into China instead of being conquered, and that the key to solving the Taiwan problem is to win the Taiwanese people’s hearts.

In recent years, Liu has frequently commented on government administration and military issues, striving to appeal to the CCP to carry out political reforms toward democracy. He has thus become an outspoken figure among military officials of similar rank and gathered a force of young supporters in the military—one of the reasons the CCP top leadership has not struck out at him.

In December 2009, CCP General Secretary Hu Jintao promoted Liu from Deputy Political Commissar of the Air Force to the Political Commissar of PLA University for National Defense. The move indicates that Hu has adopted the strategy of attempting to win Liu’s heart, which has also given Liu greater freedom to air his views.

According to some analysts, as a figure within China’s present political system, Liu’s approach will ultimately be based on exploring how the CCP can maintain its rule, rather than introducing any fundamental break with the system. As social problems intensify, in particular, Liu’s bold statements may likely become a soft tactic for the CCP to maintain stability, as it tests the waters and allows emotional venting with political consent. When the time comes for the CCP to fight desperately for its survival, however, as a member of the army Liu may only do as he is told.