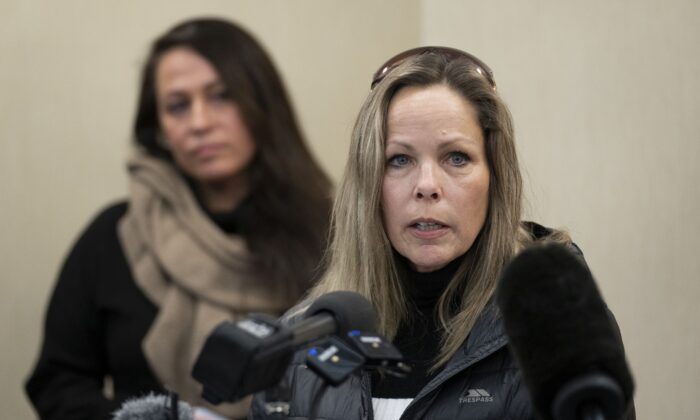 Tamara Lich, one of the organizers of the Freedom Convoy protest, delivers a statement during a news conference in Ottawa on Feb. 3, 2022. (The Canadian Press/Adrian Wyld)
Viewpoints

Lich’s Real Crime Is That She Embarrasses the Government

While the Canadian justice system is reluctant to incarcerate the most violent of criminals, it is determined to crack down in the harshest of ways on the crime of mischief. Yes, Freedom Convoy organizer Tamara Lich has been arrested again and will be transported to Ottawa.

For example, Christopher Watts in Kingston, Ontario, who was convicted of raping and killing a 13-year-old girl along with repeatedly violating past release conditions, was released last week. Police feel he is at a high risk to re-offend, but apparently it is impossible to keep him behind bars.

Winston George Thomas, a violent sex offender, was released into the population in Winnipeg on June 18. The Winnipeg Police Service says he is at high risk to re-offend “in a sexual and/or sexually violent manner against all females, both adults, and children.”

Those are just two examples from the last 10 days. We are constantly releasing violent offenders into the public and putting citizens at risk.

In Alberta in less than a year, three mothers have been murdered in separate incidents and all by violent offenders who had been released.

What can we expect when our courts continue to give weak sentences to dangerous people?

On June 13, Alek Minassian was sentenced on 10 counts of first-degree murder and 16 counts of attempted murder. He drove a van down a sidewalk in 2018 and slaughtered innocent people. His sentences will be served concurrently rather than consecutively, meaning he will be eligible for parole in 25 years. It’s something of a volume discount on violent crimes that Canada offers for mass murderers.

In most nations, such a crime would warrant a life sentence with no chance of parole, if not execution. Perhaps if Minassian could be tied to organizing some sort of protests we could ensure he stayed in prison forever.

Canada’s courts also recently ruled that extreme intoxication is a valid defence for violent crimes. While Lich has never shown any propensity for violence, perhaps she should claim she was drunk during the entire truckers’ Convoy protest.

It is contemptible that we can’t seem to keep dangerous people behind bars while all the stops are being pulled to try and keep a peaceful protester in jail.

Protesters set up a structure blocking construction of the Coastal GasLink pipeline in B.C. last year and 27 of them had to be forcibly removed by police. They were all released shortly afterward. Since then, charges have been laid against 15 of them. They will be free on bail as the case works its way through the courts.

On almost all justice fronts, Canada takes a soft-on-crime approach—except with participants in the Freedom Convoy.

Canada’s remand centres and courts are overloaded. Only the most violent and dangerous of offenders tend to be kept incarcerated without bail while they await trial.

Tamara Lich is an exception. She is not a flight risk, she has never been violent, and unless there is another convoy waiting in the wings, there is no way she can re-offend. She presents no risk to the public at large, yet the Crown has pursued her with a vigour that could be called obsessive.

As facts are determined through committee hearings in Parliament, the government’s case for invoking the Emergencies Act has been falling apart. It’s becoming clear that the government went into panic mode over a protest that could have been managed by police, and lost control. They want to distract from this.

Lich’s real crime is that she embarrasses the government. Lich is but one of many organizers of the Freedom Convoy but she presents a sympathetic symbol that the government can’t abide. The narrative of the protests being led by violent white nationalists crumbles when one hears this soft-spoken Metis woman speak, thus the government is pulling out all the stops in trying to keep Lich from reaching the public.

The government has proven itself willing and capable to exert political pressure on the justice system in the past, and it appears to be doing so now.

Whatever offence Lich may have committed leading to her re-arrest is likely of a small and petty nature. She has been incarcerated for political reasons, and that should send chills down the spines of us all. Canada’s drift into authoritarianism didn’t stop with the pandemic restrictions and invocation of the Emergencies Act.