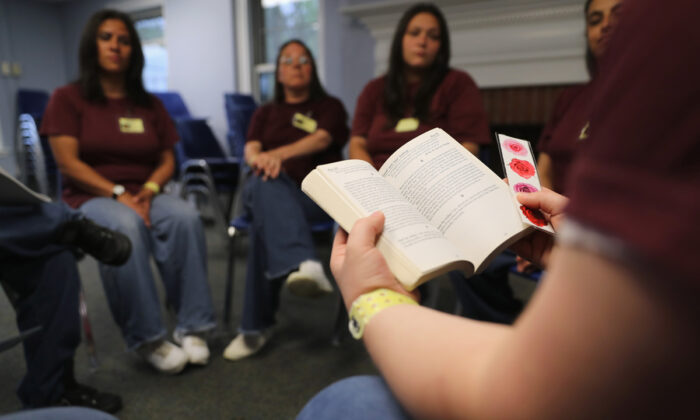 Prison inmates hold a meeting on addiction while at the York Community Reintegration Center in Niantic, Conn., on May 24, 2016. John Moore/Getty Images
Viewpoints

People who want to work should be allowed to work. That includes people who once went to jail.

Courtney Haveman had an alcohol problem. When she was 19, she got a DUI. Then she took a swing at a security guard. “I made dumb decisions,” she admits in my new video. “Served three days in jail.”

Eight years later, and now sober, Haveman enrolled in beauty school. Such schools invite applicants to “turn your interest in beauty into a rewarding career.”

The schools do provide good careers—to owners of cosmetology schools. In Pennsylvania, where Haveman applied, they typically charge $6,000 tuition and require 1,000 hours of courses.

All that training is required by the state to work.

Haveman had worked in a salon and wanted to do more. Unfortunately, “doing more” requires not just serving customers well, but getting permission from bureaucrats.

Byzantine state laws demand you get a state-approved license before you may become a hairdresser, tour guide, travel agent, house painter, and all sorts of other jobs where customer happiness should be the guide.

So after taking hundreds of hours of cosmetology courses, Haveman paid more to apply for a Pennsylvania cosmetology license.

Pennsylvania then told her she couldn’t do cosmetology there because she has a criminal record.

The bureaucrats said she could appeal. She could prove she has good moral character.

“I sent letters, and people in my 12-step program wrote letters on my behalf, character letters,” she said.

“They sent me a rejection letter that said, ‘Sorry. You lack the good moral character requirement,'” Haveman said.

“One time in my life that I felt like a productive member of society, I was proud of myself … people were proud of me, and then it was just like, you’re not good enough still.”

Haveman did her time—all three days of it. She should be allowed the “second chance” that politicians keep promising former prisoners. Her arrest was eight years ago. She then got sober. Now she sponsors other women in AA. She has a toddler to support.

But Pennsylvania states that to protect “public health and safety,” she may not practice cosmetology.

The rule doesn’t “protect” anyone. Barbers don’t have to prove they have “good moral character.”

Courtney is allowed to work as an “assistant.”

“I’m allowed to touch clients, just not allowed to do what I went to school to do!” Haveman said.

She isn’t allowed to do facials, makeup, waxing—the work she trained for. “Our government makes it extremely difficult for people like me,” she said.

“People can’t just be kicked out of society,” said Institute for Justice lawyer Andrew Ward. He took Haveman’s case for free because he believes that the cosmetology law is unconstitutional. “Everyone has a right … to pursue their own happiness … a right to engage in any of the common occupations of life.”

Who benefits from restrictive licensing laws?

“It’s certainly convenient,” said Ward, “that established players have a law that gets to keep new people, that would compete with them, out.”

Right. Cosmetology boards are dominated by people who run beauty schools. They benefit by making it hard for newcomers to compete for customers by offering better service.

Haveman said, “Years of my life have been wasted.” She paid to train for a job she isn’t allowed to do.

They crush the little guy and limit competition.

Get rid of them.