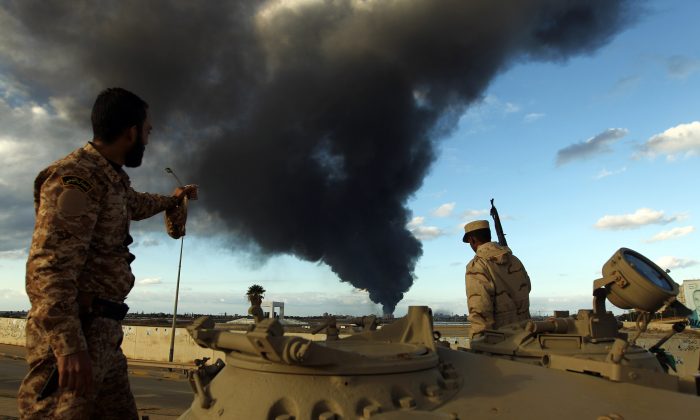 Members of the Libyan army stand on a tank as heavy black smoke rises from the city's port in the background after a fire broke out at a car tyre disposal plant during clashes against Islamist gunmen in the eastern Libyan city of Benghazi on Dec. 23, 2014. Forces loyal to former general Khalifa Haftar and to internationally recognised Prime Minister Abdullah al-Thani have been battling for weeks against Islamists who have taken control of much of Libya's second city, and the capital Tripoli. (Abdullah Doma/AFP/Getty Images)
Africa

Foreign Minister Mohamed Dayri, speaking in Cairo, said the assault was carried out by militias based in the western city of Misrata and loyal to the rival Islamist-backed government in Tripoli. He said extremist groups have joined the attack, which forced a shutdown of the country’s largest shipping terminal.

An oil corporation official, Mohammed al-Harari, said late Saturday that 850,000 barrels of oil were lost because of the fire in five storage tanks.

Fighting has erupted around Libya’s largest oil terminal, Sidra, which is currently under the control of anti-Islamist militiamen allied with the internationally recognized government based in the far eastern city of Tobruk. The Tripoli-based government had vowed to “liberate” Sidra earlier this month.

Airstrikes were reported on Sunday in Misrata for the first time, in what appeared to be a response to the attack on the oil terminals. Ahmed al-Musmari, spokesman for the Tobruk-led army, told Libya’s al-Wasat news website that airstrikes targeted bases used to attack his troops.

A security official in Misrata said the airstrikes were near the airport, with one missile striking 300 meters from an airport tower but missing the tarmac. The official, who spoke anonymously because he was not authorized to brief reporters, said the airstrike caused the suspension of a Turkish Airlines flight but no casualties.

Dayri, the foreign minister for the Tobruk government, said extremists, some of whom have pledged allegiance to the Islamic State group, have expanded their presence in Libya, including to the capital.

“We as Libyans are concerned. But the Arab world and the international community should be too because of the desire of these extremist terrorist groups to reach oil resources and revenues. This is a dangerous matter,” Dayri said.

U.N.-sponsored talks between the rival governments are scheduled for Jan. 5. The U.N. Support Mission in Libya condemned the airstrikes in Misrata.