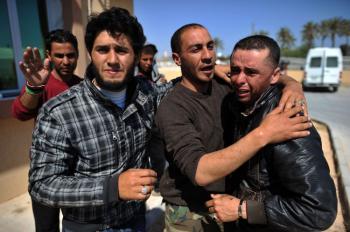 Libyan rebels weep after a comrade was shot in the head at a hospital in Misrata on April 29. (Christophe Simon/AFP/Getty Images)
Africa

By Alex Johnston
Print
Libyan forces loyal to strongman Moammar Gadhafi have attempted to place mines at the port of the besieged city of Misrata, NATO officials said on Friday.

NATO maritime forces found “a number of small vessels” and after investigations, “disrupted mine-laying operations by pro-Gadhafi forces designed to threaten the flow of humanitarian aid into Libya.”

The mines were being placed several miles from the shore near where vessels approach the port. In all, three mines were found and disposed of.

Rebels controlling the Misrata port were forewarned by NATO before NATO closed it down temporarily. Two ships were not able to deploy supplies to the city, where the humanitarian situation has gone from bad to worse in the past several weeks of fighting.

“The mining of a civilian port by pro-Gadhafi forces is clearly designed to disrupt the lawful flow of humanitarian aid to the innocent civilian people of Libya and is another deliberate violation of United Nations Security Council Resolution 1973,” stated Italian Navy Vice Admiral Rinaldo VeriI, Commander of the Maritime Headquarters in Naples.

Mussa Ibrahim, a spokesperson for Gadhafi, said that Libyan forces have taken control of the port on Friday and said that if rebels don’t surrender in four days, they will be finished off.

"We will fight for Misurata soldier by soldier, young man by young man, young woman by young woman," he told Al Jazeera, adding that Libyan forces will “finish” foreign fighters if they do not leave the country.

On Thursday, Libyan rebels and loyalist troops near the border were fighting over a key crossing point, which spilled across Tunisia. Several pro-Gadhafi troops were captured by Tunisian troops.

"Given the gravity of what has happened … the Tunisian authorities have informed the Libyans of their extreme indignation and demand measures to put an immediate stop to these violations," Tunisia’s foreign ministry said, according to The Guardian newspaper.