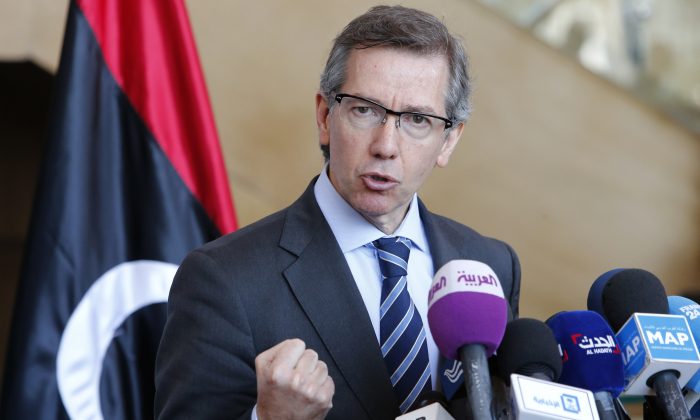 BENGHAZI, Libya—U.N.-brokered negotiations aimed at stemming Libya’s collapse into a failed state threatened to fall apart after the country’s internationally recognized Parliament on Tuesday dropped out of the talks in protest over a plan that would mean sharing power with its rivals.

The threat of the ISIS, which already holds two cities and several towns in Libya, is one of the factors fueling the United Nations’ push to resolve the country’s chronic chaos. European countries fear the extremists will gain a larger bastion just across the Mediterranean. Libya’s escalated turmoil the past year has also fueled a sharp increase in migrants using its coast to try to reach European shores, with hundreds dying at sea in the attempt.

Since early last year, Libya has been split. In the capital Tripoli and most of the west, militias backing Islamist political factions are in control, and the Islamists have set up their own parliament and government. The east is mainly held by the anti-Islamist Parliament elected last year, which is recognized internationally and backed by remnants of the Libyan army led by powerful Gen. Khalifa Hifter. The two sides have been fighting for months, with neither able to gain an advantage over the other.

The draft power-sharing plan was announced Monday from Morocco, where U.N. officials have been mediating talks between the two sides. On Tuesday, before the Libyan Parliament announcement, U.N. envoy Bernardino León expressed cautious optimism that the deal would win consensus among rival groups. “There is a general sense of hope, I would say even optimism. … But still we have to cautious.”

After the elected Parliament announced its suspension, U.N. spokesman Stéphane Dujarric said, “We all remain hopeful the parties will support the agreement.”

Since the ouster and killing of longtime dictator Moammar Gadhafi in the 2011 civil war, Libya has been in chaos. Successive governments have been powerless since the army and police were shattered by the war and the void was filled by local militias that hold sway, often battling each other and backing rival political factions. The crisis was exacerbated when a militia force known as Libya Dawn, made up mainly of fighters from the third-largest city Misrata, took over Tripoli last year, allowing the Islamist factions including the Muslim Brotherhood to set up their government while the anti-Islamist government fled east.

The U.N. plan leaves much unclear on how the two rivals would be joined in power-sharing, with vague and overlapping powers that risk causing a breakdown even if negotiations do continue. The draft calls for the forming of a Tripoli-based National Accord Government, to be worked out between the negotiators.

The internationally recognized parliament, known as the House of Representatives, would remain in place as the official legislature. The Islamist-dominated Tripoli-based parliament would be dissolved, but 90 of its members would be included in a new 120-member body known as the High Council of State. The draft states that council would be the “highest consultative body” and that its opinion would be binding on drafting laws and government decisions.

The draft calls for a mechanism to integrate militias into the armed forces, something successive governments have failed to do. It calls for the National Accord Government to act as an executive authority with control over vital state institutions and crossings, though for nearly four years governments have been unable to exert such authority.

Also, the prime minister under the deal would assume the post of supreme army commander, effectively sidelining Hifter.

Hifter is a powerful, controversial figure who last year unified many remaining army units and allied militias and launched his own offensive against Islamic militias. He has since allied with the eastern-based government, which named him top army commander.

An aide of Hifter, Col. Mohammed Hegazi, denounced the U.N. plan on Tuesday as a “dirty political game.” He said it brings the Muslim Brotherhood to power and sidelines their top foe, Hifter. “No one can take over the army,” he said.

Essa Abdel-Kauoum, the spokesman for the internationally recognized parliament’s negotiators, told The Associated Press that the body suspended participation in the talks, accusing the U.N.’s León of bending to Islamist demands and giving them more power.

“León brought us to square one … to appease an ideological group in a horrible way,” he said. “He succumbed to extortion.”

The leader of the political arm of Libya’s Muslim Brotherhood, Mohammed Sawan, welcomed the new draft.

“We think this has achieved a tangible positive improvement, which should be taken seriously and built upon to reach an agreement that ends the political division and achieves stability,” said Sawan, who heads the Justice and Construction Party.

Amid the unrest, ISIS has in the past year taken over the eastern city of Darna and the central city of Sirte, including a local air base. On Tuesday, the terrorists captured a compound just outside of Sirte that had been a headquarters for militias sent by the Tripoli-based government to fight them. The compound is on the road to Misrata, further west, putting further pressure on the city, home to the main militias backing the Islamist government.

In a statement on local TV, Misrata’s leadership called on militias to be on “highest alert” and prepare for an assault on Sirte.

A member of ISIS reached by AP vowed the group will attack Misrata with “all our might and break them, then control the city.” He spoke on condition of anonymity because he was not authorized to speak to press.

East of Sirte, ISIS has moved closer to oil terminals, most recently capturing a small town called Harawa, which the terrorists besieged until residents struck a deal allowing them to enter. By taking Harawa, the road is open toward the oil terminals of Sidra, about 25 kilometers (40 miles) away, part of Libya’s “Oil Crescent,” a central region where much of the infrastructure is located. Sidra and other oil terminals have been under the control of eastern-based militias since last year, slowing the country’s oil output to nearly a half million barrels a day, down from 1.6 million prior to 2011.